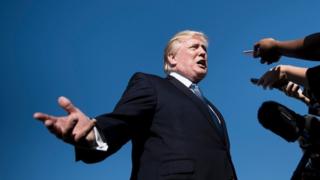 Can we tell if Donald Trump has a high IQ?

Question: How often does President Trump talk about IQ?

Answer: All the time.

When Mr Trump recently boasted that his IQ was higher than Secretary of State Rex Tillerson's, it was part of a pattern.

In 2013, he tweeted that his IQ was "much higher" than Barack Obama and George W Bush.

He has also claimed a higher IQ than comedian Jon Stewart and British star of The Apprentice, Lord Sugar.

Despite this, Mr Trump has never revealed his own IQ. So can we work it out?

"@gharo34: @realDonaldTrump Not only is your IQ somewhere between Barack Obama and G.W.Bush…but you're entertaining!"Much higher than both

An Intelligence Quotient is a score given to someone after taking an intelligence test.

There is no single "IQ test" – Mensa accepts results from more than 200 tests, including its own. Some tests last an hour, while some have no time limit.

Who were the smartest presidents?

"I don't recall ever coming across a list of presidents and their IQs," says Dr Barbara A Perry, director of presidential studies at the University of Virginia.

"But you can easily find a list of presidents inducted into Phi Beta Kappa in their universities."

Founded in 1776, Phi Beta Kappa honours "the best and brightest liberal arts and sciences undergraduates from 286 top schools across the nation".

Of the 44 presidents, 17 have been Phi Beta Kappa members. Bill Clinton, George H W Bush, and Jimmy Carter were the most recent.

And, although a president's IQ has never been confirmed, in 2006 the University of California estimated that John Quincy Adams was the most intelligent of all presidents.

"Gerald Ford was viewed as being a klutz, because he would trip in public, but that was so unfair.

"He had an undergraduate degree from the University of Michigan, where he was from, he was an Eagle Scout, he went to Yale Law School, and he was a star footballer on top of that."

She also says that intelligence is only part of what makes a good president.

"It was the Supreme Court justice Oliver Wendell Holmes who famously said Franklin Delano Roosevelt had 'a second class intellect but a first class temperament'.

"Roosevelt was re-elected in '36 by two-thirds of the electorate."

And who were the least smart?

"I would put Warren Harding in that category," says Dr Perry. "He was a journalist by training."

"Some of my best friends are journalists!" says Dr Perry, laughing.

"And my brother is. But my point is, he wasn't from Harvard or Yale, and he wasn't a brilliant lawyer who ended up on the supreme court."

So where does Donald Trump fit in?

"If he ever releases his IQ, I just have a feeling – especially since he is daring Tillerson to release his – that it's higher than people would presume," says Dr Perry.

"People who don't like him say 'oh he's such an idiot, oh he's so stupid'. But I bet you it's higher than we might realise."

"Where he has been superb, in order to win the presidency, is public communication and political skill."

Dr Perry also points out Mr Trump's business career – "he obviously had a certain native intelligence to be successful, such as he was" – and his degree from The Wharton School at the University of Pennsylvania.

But – whether Mr Trump's IQ is high or low – Dr Lawlis from Mensa says it doesn't tell you everything.

"If you take someone we consider to be a genius like Einstein, he would probably not do well on an IQ test, because he thinks outside the box," he says.

"He could probably think of a dozen answers to one question."

Either way, the time for talking may soon be over – Mensa has offered to test both Mr Trump and Mr Tillerson's IQ.

If only there was an organization known for measuring IQ… ? https://t.co/xbOKnW63ta

More on the US presidents