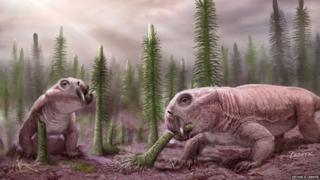 A study confirms the idea that upheavals of the geological past caused a drastic loss of biodiversity.

''Disaster faunas'' dominated by a small number of widespread, newly-evolving species prevailed for millions of years.

Researchers warn that a sixth mass extinction is underway, which is predicted to have similar effects.

''These common trends observed in the fossil record have the potential to inform modern conservation efforts, given that the current biodiversity crisis is acknowledged as representing another mass extinction event,'' say the experts.

Their work is published in the journal Nature Communications.

The study analysed long-term changes in biodiversity in the supercontinent Pangaea, which incorporated almost all of the land masses on Earth.

The scientists traced the history of almost 900 animal species living between about 260 million and 175 million years ago.

This period witnessed two mass extinctions and the origins of mammals, dinosaurs, crocodiles and turtles.

The mass extinction about 252 million years ago was the largest in the Earth's history, in which 70% of land-living animals went extinct.

One of the most common animals around this time was Lystrosaurus, an early relative of mammals, which lived in what is now Russia, China, India, Africa and Antarctica.

Fossils suggest the land-dwelling, plant-eating vertebrate dominated the Earth after many other animals went extinct.

After each mass extinction, animal communities across the globe were more similar than before, with short-lived species – so-called "disaster fauna" – becoming widespread.

"Much like in history, the past offers cautionary tales and context for our ongoing future,'' said lead researcher David Button of the University of Birmingham.

''The lesson from the past is that mass extinctions have big impacts beyond just species loss.''

Scientists have warned that a sixth mass extinction in Earth's history is underway as wildlife is lost to habitat destruction, overhunting, pollution, climate change and invasive species.

IcetruckOctober 10, 2017
Like story:
tweet
Child and teen obesity spreading across the globe
The origami-inspired bots that could perform surgery