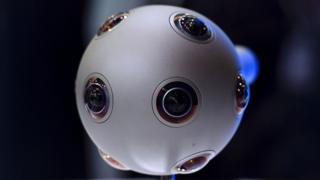 Nokia is winding down its high-end virtual reality camera division.

The Ozo and its follow-up the Ozo+ had been marketed to professionals as being able to capture the "highest quality" 360-degree footage possible, and had been used by Disney among others.

But despite a recent price cut, the Finnish firm indicated that sales had been weaker than expected.

One expert said it reflected the fact that public appetite for VR content was still very limited.

In a statement, Nokia said it now planned to dedicate its efforts to developing smart health products instead, and would leave it to others to build on its work in VR.

"The slower-than-expected development of the VR market means that Nokia Technologies plans to reduce investments and focus more on technology licensing opportunities," it said.

"The unit aims to halt development of further versions of the Ozo camera and hardware, while maintaining commitments to existing customers."

It added that 310 jobs were being cut as a consequence, affecting posts in Finland, the UK and US.

The original Ozo was first unveiled in July 2015. The handheld device featured eight cameras and the same number of microphones in order to capture both spherical video and spatial sound.

It initially had a $60,000 (£45,500) price tag, bringing it in line with the kind of other cameras commonly used for Hollywood movies and TV commercials.

Disney was one of the early adopters, using the equipment to create interactive behind-the-scenes footage for its Jungle Book film.

It was also used by London-based production house Alchemy VR for a forthcoming natural history documentary about the Galapagos Islands. The company's head of production welcomed the possibilities that its relatively small size opened up.

"The Ozo is probably the simplest camera in the world to use," Ian Syder told the TVTechGlobal news site.

"It's really changed the way we do VR. Suddenly, the riskier shots are possible – you can put it on a motorised dolly [cart], or strap it to a helicopter."

However, others were more critical.

The UK-based production house SpeedVR warned clients that the file sizes which the camera created were huge, and that it struggled with scenes featuring shadows or highlights.

"For around a tenth of the price you can get higher quality elsewhere," it blogged last year.

"The Ozo has clearly been a much smaller niche product than Nokia anticipated," commented Ben Wood from the CCS Insight tech consultancy.

"The challenge was that this was extremely early stage technology and users often found it took a long time to process the content.

"And unfortunately, 360-degree content and virtual reality more broadly have not taken off as quickly as many in the industry had hoped – despite the support of platforms including Facebook and YouTube."