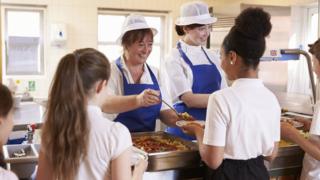 The website of payment firm ParentPay has gone down, leaving some parents unable to transfer funds for school meals and trips.

The company said it was affected "by a national internet connectivity issue – impacting some users. This is out of our control and we'll update you."

Some parents said their children were unable to buy food due to the glitch.

ParentPay said payments had been suspended until the issue was resolved.

Some parents reported being able to make transactions on Tuesday evening, but the company told the BBC the issue was not yet fixed and there was no timescale for when it would be.

"What do [the] kids do for lunch?" she asked, adding that she had been unable to get through to the company on the phone.

Charlotte Banks said on Facebook that neither of her sons had been able to buy food.

"This is getting ridiculous now. Seems to be every few days there are issues with this site," she said.

People also expressed scepticism about the company's explanation for the outage.

Heidi Burrows said: "The only company who appears to have national internet connectivity are ParentPay, so I think you may want to adjust your wording as many of us work in big firms relying on internet and no one else is having this issue!"

IcetruckOctober 10, 2017
Like story:
tweet
14 Horrifying Stories From People Who Came Back From the Dead
California wildfires: Residents find devastation in Santa Rosa