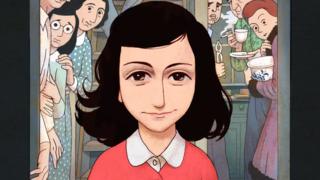 "We do have similar personalities. I'm a bookworm, I love books."

India is 14 years old. She's wrapped up in a maroon Harry Potter hoodie.

Like so many readers around the world, Anne Frank has helped her to understand an otherwise unimaginable and distant chapter of history.

India is one of a group of pupils congregated outside a canal-side warehouse in Amsterdam, where Anne's father once sold the gelling agent pectin. They've come to learn more about the life of the young wartime diarist.

Anne Frank was 15 when she died. She was an aspiring author, and one of more than a million Jewish children killed in the Holocaust.

Today her diary – which she nicknamed Kitty – is one of the most-read books in the world. Her teenage prose has spawned Hollywood screenplays, Broadway shows and countless other (re)productions.

Now it has been adapted into comic-strip format, in a book produced by the creators of the Oscar-nominated animation Waltz with Bashir, and there is a film coming soon too.

Accompanied by excerpts from her diaries and letters, the "graphic diary" depicts the story of how Anne Frank and her family went into hiding after her sister Margot received a summons to report to a Nazi work camp.

They survived for almost two years, tiptoeing around in the dark, damp confines of the "achterhuis" (secret annex) before being discovered.

Nazis emptied Anne's schoolbag to carry cash and jewellery looted from Jewish homes – her distinctive red-checked diary was recovered from the floor of the hideout.

Read more on the Holocaust:

The Holocaust: Who are the missing million?

The Holocaust year by year

The hidden graves of the Holocaust

"The Graphic Diary is the perfect solution for the next generation," he says.

"To reach the readers of the diary you also have to find their language – more people will get to know the story. Period."

In fact, readership of the original is increasing every year.

I don’t think of all the misery but of the beauty that still remains.

from The Diary of Anne Frank

Anne Frank has come to symbolise courage, optimism and determination.

But it is her teenage attitude and frustrations that resonate with young people.

"It's easy to understand. She's eloquent," explains Eilidh Lean from the Anne Frank Trust, as she follows the Scottish students towards the secret annex where the Frank family hid.

"Six million people [approximate number of Jews murdered during World War Two] is difficult to get their heads around. Anne puts a human face on it. You can tell she's 13. She's going through puberty. They can empathise with her."

But reimaging Anne's famous prose in cartoon form was not an easy decision.

Illustrator David Polonsky was initially reluctant, for fear of becoming part of the "Holocaust industry" sometimes accused of commodifying the Diary of a Young Girl (also known as The Diary of Anne Frank).

But he hopes the images will inform and stimulate contemporary debates about people forced out of their homes by politicians waging war.

"It is one story about one person, and each immigrant has a different story, too," he says.

At the Montessori primary that Anne Frank attended before the Nazis created Jewish-only schools, not all the pupils are convinced the new version is necessary.

The concrete building stands in the southern suburbs, away from the city centre tourist strips. Colourful children's bikes lean against one another outside.

Eleven-year-old pupils Sammy Neeter and Zahara Belen Mackay are conscious of the historical significance of their environment, proudly leading me to see Anne's old wooden desk. Sammy says it's "weird but cool" that he used to sit in her classroom.

His mother read Anne Frank's diary to him when he was seven years old. What does this earnest young man make of the comic-book style of interpretation?

"When you look at the pictures you cannot really see what happened; when you read the diary you can see more with your imagination…"

But Zahara believes this approach could help to engage younger audiences.

"It's nice for little children, but once you go to the secondary school you should just read the original book because it's very nice and it actually has her words."

What is done cannot be undone, but one can prevent it happening again.

from The Diary of Anne Frank

The pupils from Dundee's Harris Academy have stepped out of the claustrophobic confines of the secret annex and into the invigorating autumn sunshine; inspired after literally walking an hour in Anne Frank's footsteps.

"It's quite surreal," Joshua reflects, gazing downwards. "I saw how she lived… being determined and, like, just getting through and keeping on going.

"Now we've been here we can see how this genocide happened and we need to go home and really band together to make sure it never happens again."

The Graphic Diary of Anne Frank is published in the Netherlands and Germany. An English edition will reach audiences in the UK and US early 2018. An animated film is scheduled for release in 2019.