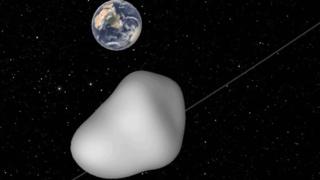 An asteroid the size of a house is set to pass close to the Earth on Thursday.

The space rock will hurtle past our planet at a distance of about 42,000km (26,000 miles), bringing it within the Moon's orbit and just above the altitude of communication satellites.

Nasa scientists say there is no risk of an impact, but the flyby does provide them with the opportunity to test their asteroid-warning systems.

A global network of telescopes will be closely monitoring the object.

Paul Chodas, manager of Nasa's Centre for Near Earth Object Studies (CNEOS) at the Jet Propulsion Laboratory in California, told BBC News: "We are going to use this asteroid to practise the system that would observe an asteroid, characterise it and compute how close it is going to come, in case some day we have one that is on the way inbound and might hit."

The asteroid, called 2012 TC4, was first spotted five years ago.

However, even space rocks on this scale are dangerous if they strike.

Nasa search programmes are getting better and better at finding asteroidsPaul Chodas, Centre for Near Earth Object Studies

When a 20m-wide asteroid exploded over Chelyabinsk in central Russia in 2013, it hit the atmosphere with energy estimated to be equivalent to 500,000 tonnes of TNT, causing a shockwave that damaged buildings and injured more than a thousand people.

Nasa scientists who have spent the last two months tracking this new rocky visitor say their calculations show that it will safely clear the Earth and poses no threat.

Instead, they will use this close approach to rehearse for future potential strikes.

More than a dozen observatories, universities and labs around the world will be watching 2012 TC4 as it flies past.

This will help them to refine how asteroids are tracked and provide a chance to test international communication systems.

Dr Chodas said that while the risk of an asteroid hit was small, it was prudent to plan ahead.

"Nasa search programmes are getting better and better at finding asteroids," he explained.

"It's been a priority to find the large asteroids first. So far the Nasa surveys have found 95% of the asteroids that are one kilometre and larger – these are the ones that could cause a global catastrophe.

"This little one – we are not trying to find all of the ones of this size. It is just a convenient asteroid coming by that we can practise our tracking techniques on."

He added that if an asteroid was discovered to be heading for the Earth, scientists were looking at different techniques to avert a disaster.

"If we had enough warning time – five or 10 years – then we could do something about it, especially if it's on the small side.

"We could go up and move it, change its velocity years ahead, and that would be enough to move it away from a collision course."