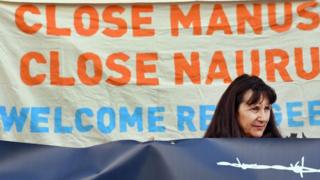 Refugees held by Australia on Papua New Guinea's Manus Island have been given the option of possibly moving to a detention centre in Nauru.

The offer is for those who have applied for US resettlement, and comes ahead of the Manus camp's planned closure.

Australia holds refugees and asylum seekers who arrive by boat on Manus and Nauru – both small Pacific islands.

The government said its offer is aimed at reducing numbers on Manus. One refugee called it a "political trick".

Refugees will have until 23 October to apply for the transfer and need to be accepted by Nauruan authorities.

"We're putting those options on the table because we want people out of the Manus Island regional processing centre and we want that centre closed," Australian Immigration Minister Peter Dutton told the Australian Broadcasting Corp on Wednesday.

Behrouz Boochani, an Iranian refugee and journalist held on Manus, said many fellow detainees did not trust the Australian government and did not want to go to Nauru.

"It's completely unacceptable that after more than four years the Australian government still refuses to solve the problem by taking the refugees to a safe place and instead is trying to send them to another hell," he said.

A notice to detainees said the Nauru offer would not affect applications for resettlement in the US, which has said it will take up to 1,250 refugees from the two centres.

The US accepted about 50 refugees last month, but it may ultimately take fewer than 1,250 after completing a vetting process. The Australian government has said the Manus centre will close by the end of this month.

Refugee advocates say at least 800 men – including 739 with official refugee status – remain there, and are resisting attempts to be moved to a nearby transit centre due to fears about their safety.

Two detainees have died on the island in recent months, both in suspected suicides.

In September, the Australian government agreed to pay A$70m (£40m; $55m) to refugees and asylum seekers who said they had suffered mental and physical harm in detention.

Australia's detention centres have been criticised by the United Nations and human rights groups. The government maintains its policy prevents deaths at sea and discourages people smugglers.