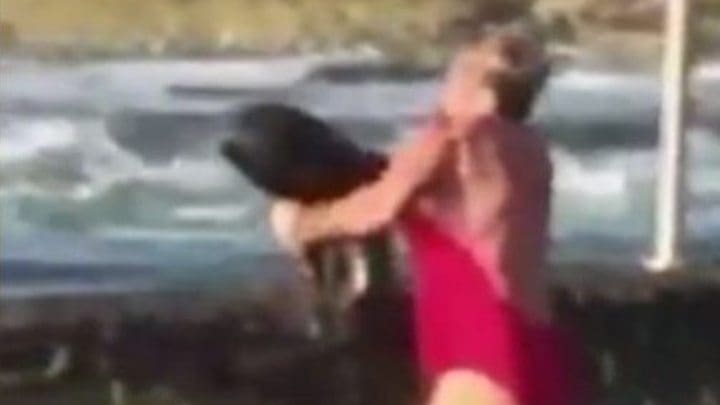 An Australian woman has been filmed rescuing a shark by calmly picking it up from a rock pool and throwing it into the sea.

Melissa Hatheier, 50, released the stranded animal after her mother noticed a fin in the Sydney pool where she was swimming.

Ms Hatheier said the animal, believed to be a Port Jackson shark, appeared to be in distress.

Footage of the rescue has been viewed widely online.

"It was kind of like a toddler, and [there was] not a problem throwing him over," Ms Hatheier told the BBC.

"I just sort of dived on him, put my knee on his fin and grabbed him around the neck and thought, sweet, he won't be able to get me."

Port Jackson sharks usually measure less than a metre and are not dangerous to humans, according to the Australian Museum.

Ms Hatheier said she suspected the shark had become stranded in the sea-adjoining pool at high tide. It swam away quickly when released.

People commenting online have praised her actions as "legendary" and the "most Australian thing".

Local police confirmed the incident happened in the suburb of Cronulla on Monday.