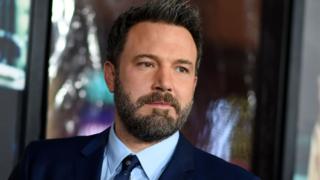 Actor Ben Affleck has apologised after being criticised for groping an MTV presenter on air in 2003.

The incident surfaced after he posted condemnation of Harvey Weinstein, who is facing sexual assault allegations.

One Twitter user remembered how Affleck "grabbed Hilarie Burton's breasts on TRL once" but "everyone forgot though". Burton replied: "I didn't forget."

Affleck later wrote on Twitter: "I acted inappropriately toward Ms Burton and I sincerely apologise."

I acted inappropriately toward Ms. Burton and I sincerely apologize

A clip of the moment from TRL Uncensored was recirculated, including a clip of Burton recalling how Affleck had put his arm around her and proceeded to "tweak my left boob".

"Some girls like a good tweakage here and there," she said on the programme. "I'd rather have a high five."

On Twitter, after being reminded, she said she was "a kid" at the time and "had to laugh back then so I wouldn't cry".

Affleck made his apology a day after posting a message giving his views on Hollywood producer Weinstein's alleged sexual harassment and assaults.

"I am saddened and angry that a man who I worked with used his position of power to intimidate, sexually harass and manipulate many women over decades," he said.

"The additional allegations of assault that I read this morning made me sick.

"This is completely unacceptable, and I find myself asking what I can do to make sure this doesn't happen to others. We need to do better at protecting our sisters, friends, co-workers and daughters.

"We must support those who come forward, condemn this type of behaviour when we see it and help ensure there are more women in positions of power."

Weinstein is currently facing a number of allegations involving sexual harassment and assault.

His spokeswoman Sallie Hofmeister said any allegations of non-consensual sex were "unequivocally denied" and that "there were never any acts of retaliation against any women for refusing his advances".

"Mr Weinstein obviously can't speak to anonymous allegations, but with respect to any women who have made allegations on the record, Mr Weinstein believes that all of these relationships were consensual," the statement added.