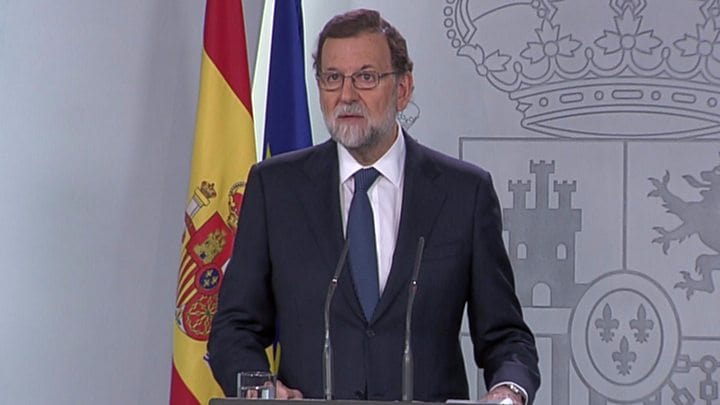 Spanish Prime Minister Mariano Rajoy has given Catalonia's separatist leader five days to say whether or not he has declared independence.

If Carles Puigdemont confirms by Monday that he has, he will be given a further three days to withdraw the declaration.

Failing that, Madrid will invoke Article 155 of the constitution allowing it to suspend the region's autonomy and impose direct rule.

Catalan leaders signed a declaration of independence on Tuesday.

However, they halted its implementation to allow for talks with Madrid.

Spain has been in turmoil since the separatist government held a disputed referendum in Catalonia on 1 October which was declared invalid by the country's Constitutional Court.

Mr Rajoy said his government had asked the regional government to clarify whether or not it had declared independence.

He accused Mr Puigdemont of having created "deliberate confusion" and said he wanted to restore "certainty".

"This call – ahead of any of the measures that the government may adopt under Article 155 of our constitution – seeks to offer citizens the clarity and security that a question of such importance requires," Mr Rajoy said.

"There is an urgent need to put an end to the situation that Catalonia is going through – to return it to safety, tranquillity and calm and to do that as quickly as possible."

Mr Rajoy was speaking after holding an emergency cabinet meeting on Wednesday morning to discuss the government's next steps.

Speaking later in parliament, Mr Rajoy said Spain was facing the most serious threat to its 40-year-old democracy.

He accused the separatists of hatching an "anti-democratic plan foisting their will on all the people of Catalonia", and said the Spanish government had had no choice but to restore order.

"It falls to the Catalan leader to restore constitutional normality," he told deputies, rejecting any suggestion of outside mediation in the dispute.

He added that he was willing to negotiate on the issue of regional autonomy and changes to the constitution – but this had to be within the framework of the law.

Spain's prime minister tried today to put the ball back in the Catalan court. He has asked the Catalan president to clarify if he is making a declaration of independence or not.

In the meantime, sources in the Senate (Spain's upper house of parliament, where Prime Minister Rajoy's Popular Party has a majority) say the request has been made to trigger Article 155 of the Spanish constitution, under which Mr Rajoy would be able to suspend Catalan autonomy – possibly immediately, or bit by bit.

Article 155 has never been used before, so we are in a kind of Brexit situation before Article 50 was triggered. The article legally exists but there are disagreements about how far-reaching it is, how it would/should work (and how quickly) in practice.

Reports in Spanish media have suggested that if the Spanish prime minister were to activate Article 155 in the absence of a response from the Catalan president, pro-independence parties in the Catalan parliament would then declare independence.

The leader of the opposition Socialists, Pedro Sanchez, told reporters that his party and the government had agreed to examine the possibility of using constitutional reform to end the crisis.

This would be focused on "how Catalonia remains in Spain, and not how it leaves", he added.

He urged the international community to recognise Catalonia as an independent and sovereign state.

He said the "people's will" was to break away from Madrid but he also said he wanted to "de-escalate" the tension around the issue.

With this in mind he announced that he was "suspending the effects of the declaration of independence" for more talks with the Madrid government, which he said were needed to reach a solution.

Crowds of independence supporters in Barcelona cheered Mr Puigdemont's initial remarks but many expressed disappointment as he clarified his stance.

Catalonia is one of Spain's wealthiest regions but a stream of companies has announced plans to move head offices out of the province in response to the crisis.