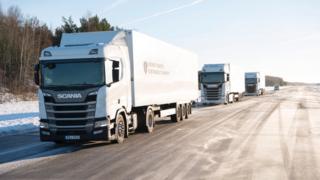 What will stop these self-driving lorries colliding?

What impact could 5G – the new high-speed mobile technology being trialled around the world – have on the way we work and play?

Swedish transport company Scania believes lorries could use far less fuel if they drove much closer together, controlled by wirelessly communicating onboard computers.

But to prevent these "platooning" lorries crashing into each other, you'd better be sure your communications are fast and reliable.

So Scania is working with Ericsson on trials of the new 5G (fifth generation) wireless broadband technology, due to be rolled out globally in 2020.

It promises much faster data transfer speeds, greater coverage and more efficient use of the spectrum bandwidth.

This is because 5G direct communication is designed to handle fast moving objects and congestion more efficiently, he says.

"Faster communication will make it possible to reduce the distance between vehicles in the platoon, which might further reduce the air drag and give positive effects on fuel consumption," he explains.

This could help create "a more efficient, greener" world.

5G is designed to accommodate the growing number of devices reliant on a mobile internet connection – from fridges to cars – and is 10 times faster than the highest speed 4G can manage.

"It will enable a lot of applications which were unthinkable before," says Mischa Dohler, professor in wireless communications at King's College London.

South Korea has plans to implement 5G for the Winter Olympics in February 2018, giving visitors access to virtual reality (VR) content on their mobiles.

One of the UK's first 5G test-beds is in Brighton, where non-profit innovation hub, Digital Catapult Centre, has just completed a series of workshops for small businesses.

"But it isn't just about speed – [5G] has specific features that will unlock and enable new technologies."

Chiefly, these include fewer dropped connections and lower latency – the time it takes for data to be stored or retrieved.

"Wi-fi is fine if you are sitting with a few people in a meeting, or moving slowly around indoors," explains Rahim Tafazolli, head of Surrey University's 5G Innovation Centre.

"However, once you start to move quickly and the number of people increases to more than 10 – at Waterloo Station, for example – you need to have a system that can hand over connection between radio cells without causing a drop in signal, and which can accommodate several people simultaneously.

This is because every wi-fi signal has a defined range, whereas 5G will be flexible, enabling mobile devices to switch automatically between the various newly available frequencies.

One frequency will be for long-range connections, across rural areas for example; one will be for urban environments, providing high numbers of users with high-speed connectivity; and there will also be a high-capacity frequency for densely populated areas, such as sports stadiums and railway terminals.

This flexibility will lead to "an ever-expanding array of new business services", Mr Tafazolli believes, and could be critical to the success of autonomous vehicles and the internet of things.

"If you have a very detailed, immersive VR experience and you try to run it over a mobile headset currently, there is enough latency… that it makes you feel sick," he explains.

So high-quality VR experiences rely on headsets being "tethered" to a computer, which provides the necessary computing power.

5G offers the opportunity to recreate high-quality experiences on the move.

"It could enable you to have an experience comparable with home gaming on your mobile," says Mr Scott, "allowing you to compete or collaborate with other people in real time."

Andy Cummins of Brighton-based digital agency, Cogapp, says 5G will allow his firm to create much more exciting AR and VR content for visitors to museums and galleries.

"Without [5G] these types of experiences… would at best seem laggy and unintuitive," he says.

And Tim Fleming, founder of Future Visual, another Brighton company preparing to trial 5G, says: "We are very interested in in-store retail VR experiences, and creating a flagship VR experience that can be taken to any location.

"At the moment we have to use a dedicated PC, but with 5G you just need a headset and a mobile device. The heavy lifting is done in the cloud. That's very interesting."

Of course, 5G roll-out is not without its technical challenges.

Installing all the base stations and antennae is very expensive, and many of today's devices will not be compatible with the new technology.

It is not clear at the moment who is going to pay for it.

But Ericsson's head of 5G commercialisation, Thomas Noren, is confident that 5G services will be cheaper to run because the network will be more energy efficient and production and operational costs will be lower.

There is clearly still much detail to iron out, but research consultancy Ovum predicts that there will be 389 million 5G subscriptions globally by the end of 2022.

Users still struggling with patchy 4G coverage maybe forgiven for being a little sceptical about the ambitious claims being made for 5G.

But the potential to transform a number of businesses – and create many new ones – is clearly there.