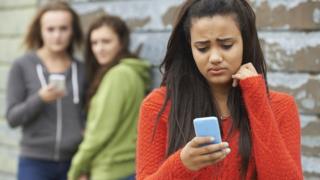 Facebook and Twitter could be asked to pay for action against the "undeniable suffering" social media can cause, the culture secretary has said.

Ms Bradley wants social media groups to sign up to a voluntary code of practice and help fund campaigns against abuse.

She also wants social media platforms to reveal the scale of online hate.

Despite promising to introduce new laws regulating the internet in the Conservative Party's manifesto, Ms Bradley told the BBC that legislating would take "far too long".

Ms Bradley said that the plan was for a "collaborative approach" with internet groups, adding that she sees a "willingness from them".

She added: "Many of them say: 'When we founded these businesses we were in our 20s, we didn't have children… now we're older and we have teenagers ourselves we want to solve this".

Ms Bradley said the internet had been an "amazing force for good, but it has caused undeniable suffering and can be an especially harmful place for children and vulnerable people".

"For too long there's been behaviour online that would be unacceptable if it was face-to-face."

One of the proposals is for an annual transparency report which could be used to show:

Ms Bradley said that the government "could legislate in the future", adding that any changes to existing law would be underpinned by the following principles:

The government also wants to see a new body, similar to the UK Council for Child Internet Safety, to consider all aspects of internet safety.

In response to the consultation, Facebook said: "Our priority is to make Facebook a safe place for people of all ages which is why we spent a long time working with safety experts like the UK Safer Internet Centre, developing powerful tools to help people have a positive experience."

"We welcome close collaboration between industry, experts and government to address this important issue."

A spokesperson for the NSPCC said keeping young people safe online was "the biggest child protection issue of our time".

"Social media companies are marking their own homework when it comes to keeping children safe, so a code of practice is definitely a step in the right direction but 'how' it is implemented will be crucial.

"Young people face a unique set of risks when using the internet and it is important any strategy recognises the challenges they face online and requires industry to act to protect them."

Vicki Shotbolt, chief executive at social enterprise Parent Zone, said it was encouraging to see the government taking "concrete steps" to make the internet a safer place for children.

Asking social-media companies to contribute towards the costs of educating the public about online dangers has precedence in the gambling industry, which currently contributes an amount to the treatment of gambling addiction.

The consultation will close on 7 December, and the government expects to respond in early 2018.