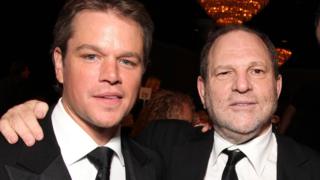 Actor Matt Damon has denied trying to "kill" a story about Harvey Weinstein's behaviour when it was investigated by a reporter 13 years ago.

Sharon Waxman has said she looked into rumours that an employee of Weinstein in Italy was procuring women for him.

She said Damon and Russell Crowe called her to vouch for the employee.

But Damon has said he did not know the detail of the allegations. "I would never, ever, ever try to kill a story like that," he told Deadline.

"I just wouldn't do that. It's not something I would do, for anybody."

Waxman, who then worked for the New York Times, was ultimately unable to publish any allegations relating to Weinstein's sexual behaviour.

Weinstein had asked Damon and Crowe to call her, she told BBC Newsnight.

"That was Harvey's attempt to beat the story back," she said.

Damon said Weinstein told him the New York Times story would be claiming the Italian executive "had no professional experience". He said the producer asked him to "tell her that he was a professional and you had a good experience, and that was it".

He said: "I was never conscripted to do anything. We vouch for each other, all the time."

Damon added: "I'm sure I mentioned to her that I didn't know anything about the rest of her piece, because I didn't."

'We didn't all know'

The accusations that have now come out against Weinstein are "the kind of sexual predation that keeps me up at night", Damon said, adding that he had never seen inappropriate behaviour during time spent making films with Weinstein.

"I think a lot of actors have come out and said, 'everybody's saying we all knew'. That's not true," Damon said.

"This type of predation happens behind closed doors, and out of public view. If there was ever an event that I was at and Harvey was doing this kind of thing and I didn't see it, then I am so deeply sorry, because I would have stopped it."

Waxman claimed the 2004 New York Times story was "gutted" after "intense pressure" from Weinstein. The paper went on to break the story of the latest allegations at the weekend.

The New York Times's executive editor Dean Baquet, who wasn't working for the paper in 2004, said: "It is unimaginable to me that The Times killed a story because of pressure from Harvey Weinstein, who was and is an advertiser."

Weinstein is currently facing a number of allegations involving sexual harassment and assault.

Angelina Jolie, Gwyneth Paltrow, Heather Graham and Ashley Judd are among those to have accused the film producer of harassment.

Three actresses, including Asia Argento, accused Weinstein of sexual assault in a report by the New Yorker.

In a statement, Weinstein's spokeswoman Sallie Hofmeister said: "Any allegations of non-consensual sex are unequivocally denied by Mr Weinstein. Mr Weinstein has further confirmed that there were never any acts of retaliation against any women for refusing his advances.

"Mr Weinstein obviously can't speak to anonymous allegations, but with respect to any women who have made allegations on the record, Mr Weinstein believes that all of these relationships were consensual. Mr Weinstein has begun counselling, has listened to the community and is pursuing a better path."

It was also announced on Tuesday that Weinstein's wife, Marchesa co-owner Georgina Chapman, is leaving him.

IcetruckOctober 11, 2017
Like story:
tweet
Catalonia: Spain takes step towards direct rule
8 Tricks All Attractive Women Use To Make Men Think About Them