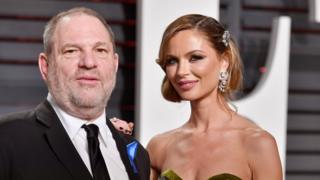 The wife of producer Harvey Weinstein has said she is leaving him following allegations of sexual harassment from a string of actresses.

Angelina Jolie and Gwyneth Paltrow are the latest women to come forward. Both said the incidents happened early in their careers.

On Tuesday, Weinstein also denied allegations of rape made in The New Yorker magazine.

Weinstein was fired on Sunday from his own film studio. The Weinstein Company board said on Tuesday that they would help any criminal investigation.

"My heart breaks for all the women who have suffered tremendous pain because of these unforgivable actions," Georgina Chapman, 41, told People magazine.

Chapman and Weinstein, 65, have two children together.

In a statement, they said they were "disgusted by the recent reports about Harvey Weinstein" and added that they "celebrate the courage of women who have come forward".

Weinstein was a big donor to the Democratic party under Obama's leadership. The Obamas' eldest daughter Malia worked as an intern at The Weinstein Company in New York earlier this year.

Weinstein also donated to Hillary Clinton's 2016 presidential campaign. Mrs Clinton said she was "shocked and appalled" by the revelations.

Paltrow and Jolie both sent statements about Weinstein's behaviour to the New York Times, which first reported allegations against him last week.

Jolie said in an email: "I had a bad experience with Harvey Weinstein in my youth, and as a result, chose never to work with him again and warn others when they did.

"This behaviour towards women in any field, any country is unacceptable."

In a statement, Paltrow alleged that, after Weinstein cast her in the leading role in Emma, he summoned her to his hotel suite, where he placed his hands on her and suggested massages in his bedroom.

"I was a kid, I was signed up, I was petrified," she told the newspaper.

She said she told her then-boyfriend Brad Pitt about the incident, and said he confronted Weinstein.

"I thought he was going to fire me," she said.

Others to have spoken out about their experiences with Weinstein include:

The New Yorker report also said 16 former and current employees at Weinstein's companies "witnessed or had knowledge of unwanted sexual advances and touching at events associated with Weinstein's films and in the workplace".

Weinstein's spokeswoman Sallie Hofmeister issued a statement in response to the article.

"Any allegations of non-consensual sex are unequivocally denied by Mr Weinstein," she said. "Mr Weinstein has further confirmed that there were never any acts of retaliation against any women for refusing his advances.

"Mr Weinstein obviously can't speak to anonymous allegations, but with respect to any women who have made allegations on the record, Mr Weinstein believes that all of these relationships were consensual. Mr Weinstein has begun counselling, has listened to the community and is pursuing a better path."

Buzzfeed reporter Lauren Yap did a screen grab and posted Lohan's video, in which she also posted an angel emoji under Weinstein's name, on Twitter. Lohan also said Chapman should "be there for her husband" – although it's not clear if she knew at the time that Chapman had said she was leaving him.

IcetruckOctober 11, 2017
Like story:
tweet
Unsent text accepted as dead man’s will by Australian court
Microsoft gives up on Windows 10 Mobile