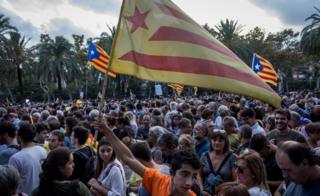 The Spanish government has rejected a statement of independence signed by Catalan leader Carles Puigdemont and dismissed calls for mediation.

Spain's deputy prime minister described Mr Puigdemont as someone "who does not know where he is, where he's going".

Prime Minister Mariano Rajoy is holding an emergency cabinet meeting to discuss the government's next steps.

Mr Puigdemont signed a declaration of independence on Tuesday, but halted implementation to allow negotiations.

There had been speculation that the Catalan president might declare independence and put the move into effect, plunging Spain into an even deeper political crisis.

Spain has been in turmoil since a disputed referendum on 1 October which was declared invalid by the country's Constitutional Court.

"We call on international states and organisations to recognise the Catalan republic as an independent and sovereign state," he said.

He said the "people's will" was to break away from Madrid, but he also said he wanted to "de-escalate" the tension around the issue.

"I propose suspending the effects of the declaration of independence to undertake talks in the coming weeks without which it is not possible to reach an agreed solution," Mr Puigdemont told MPs.

Crowds of independence supporters in Barcelona cheered Mr Puigdemont's initial remarks, but many expressed disappointment as he clarified his stance.

The first draft declared a motion for immediate unilateral independence that parliament would vote on within 48 hours. Some members of the coalition government threatened to walk in that event, arguing that that kind of language was too strong and would provoke an immediate response of force from the Spanish government.

The second argued for a symbolic declaration of independence, but expressed no intent to push ahead with plans to separate. This time members of the left-wing CUP party who support a minority Catalan separatist government threatened to walk out.

The speech that was delivered appears to be the third and final draft, which suspends any declaration of independence, and is said to have been influenced by the intervention of the EU Council President Donald Tusk, who urged Mr Puigdemont "not to announce a decision that makes dialogue impossible".

The Catalan government appears to have read this as a sign that the EU could be open to future dialogue, even if Spain is not.

"Neither Mr Puigdemont nor anybody else can claim… to impose mediation," she said.

"The speech the president… gave today is that of a person who does not know where he is, where he's going, nor who he wants to go there with."

Spain's Justice Minister Rafael Catala reiterated the government's position that the referendum was illegal and its results invalid.

How has the Spanish press reacted?

Ara (Barcelona – centre-left, pro-independence) says the Catalan leader "risks the unity of pro-independence groupings in order to try to achieve mediation for a negotiation" with the Spanish state.

El País (Madrid – centrist, unionist) says the government has been studying the application of Article 155 – which would suspend Catalonia's autonomy – for days.

El Mundo (Madrid – centre-right, unionist) says the Spanish government could declare a state of emergency if it considers there is a serious risk of public disorder but says triggering Article 155 is the most likely measure.

La Vanguardia (Barcelona – centre-right, pro-independence) says that in attempting to find a middle way between proclaiming independence and maintaining the status quo, Mr Puigdemont has created "confusion and chaos".

Ahead of Mr Puigdemont's address, influential figures including Barcelona's mayor Ada Colau and European Council President Donald Tusk had urged him to step back from declaring independence.

Catalonia is is one of Spain's wealthiest regions, but a stream of companies has announced plans to move head offices out of Catalonia in response to the crisis.