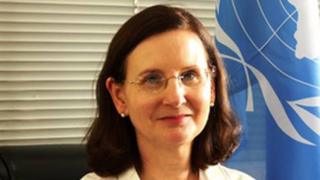 The United Nations has announced that its top official in Myanmar is being recalled to headquarters in New York.

Renata Lok-Dessallien was the focus of a BBC investigation last month in which she was accused of suppressing internal discussion on Rohingya Muslims.

More than 500,000 Rohingya have fled a military offensive following deadly militant attacks on police in August, with many now in camps in Bangladesh.

The UN said Ms Dessallien would leave by the end of October.

It said in June that she would be rotated from her position but stressed then the decision had nothing to do with her performance.

Diplomatic and aid community sources in Yangon, however, told the BBC's Jonah Fisher the decision was linked to her failure to prioritise human rights.

Since then Ms Dessallien has remained in post with the government of Myanmar (Burma) rejecting her proposed successor.

Two weeks ago the UN secretary-general said he had full confidence in Ms Dessallien but our correspondent says that now appears to be in doubt.

In the BBC investigation, sources in the UN and aid community told the BBC she had also tried to stop human rights officials from visiting areas where the army allegedly persecuted the Rohingya minority.

A statement from the UN in Myanmar, in response to a BBC inquiry, defended Ms Dessallien's handling of the Rohingya issue and said her departure was part of a succession process.

Who will replace her remains to be announced.