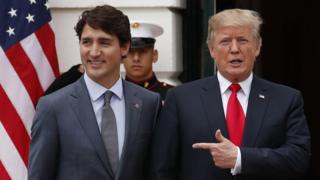 The US president said if there was no deal on the North American Free Trade Agreement, it would be terminated.

He was speaking at the White House with visiting Canadian PM Justin Trudeau.

Replying to a question, Mr Trump said he said he would consider a trade pact with Canada minus Mexico, adding that both the US and Canada wanted to protect their workers.

The current round of talks on renegotiating the trade bloc is reported to be stalling, with Mexico opposing a US move to increase the percentage of US-made components in car manufacturing.

Mr Trump's stance has however been criticised by US businesses,

And Mexican foreign minister Luis Videgaray, speaking ahead of the latest round of talks, said terminating Nafta could harm US-Mexico relations and damage co-operation on issues like fighting drug-trafficking.

Mr Trudeau said he believed the Nafta talks could still end in a "win, win, win".

But he said that Canada had to "be ready for anything" if the attempts to modernise the 23-year-old deal faltered.

American and Mexican officials say they want a renegotiated deal by December.

This week the influential US Chamber of Commerce warned it was time to "ring alarm bells" over the Nafta talks.

The business lobby group said there were "several poison pill proposals" put on the table by the US that could tank the renegotiations.

Those include US demands to adjust the rules of origin, which would increase the percentage of the content of car parts and other materials that would come from Nafta countries in order for a good to qualify as duty free – a specific concern for the North American auto industry.

The US and Canadian leaders also discussed the Bombardier-Boeing trade dispute.

Canada and the UK are sparring with the US over Canadian aerospace giant Bombardier.

Bombardier is a significant employer in Northern Ireland and Canada.

Mr Trudeau said he "highlighted to the president how much we disagree vehemently" on the decision to impose anti-dumping duties.