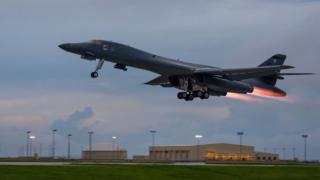 The US has conducted a joint military exercise with South Korea, flying two strategic bombers over the Korean peninsula.

It comes amid heightened tensions with North Korea over its nuclear programme.

The bombers took off from the US Pacific territory of Guam on Tuesday night, before entering South Korean airspace and conducting firing exercises over the East Sea and Yellow Sea, South Korea's military said.

The training was part of a programme of "extended deterrence" against North Korea, it added.

The US said Japan's air force also took part in the drill.

US President Donald Trump met top officials from his national security team on Tuesday night for a briefing on ways to respond to threats from North Korea, the White House said.

In a speech at the UN in September, Mr Trump accused Mr Kim of being "on a suicide mission" – while Mr Kim responded by vowing to "tame the mentally deranged US dotard with fire".

On Wednesday, a South Korean lawmaker said North Korean hackers had reportedly stolen a large cache of military documents from his country, including a plan to assassinate North Korea's leader Kim Jong-un, and wartime contingency plans drawn up by the US and South Korea.

The South Korean defence ministry refused to comment about the allegation, while North Korea denied the claim.