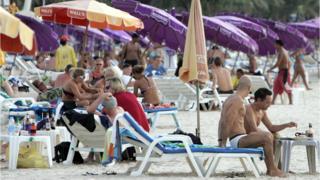 Thailand is introducing a smoking ban on beaches across the country with those caught violating the law facing up to a year in prison.

The measure will apply to up to 20 beaches in areas including the popular tourist destination of Phuket.

It comes after the country's Department of Marine and Coastal Resources (DMCR) said it had retrieved tens of thousands of cigarette butts left in the sand.

The DMCR said the discarded waste made up a third of all rubbish collected.

The head of the department, Jatuporn Buruspat, said that up to 138,000 cigarette butts had been collected by the environmental group over a 2.5km (1.5 miles) stretch of Patong beach in Phuket.

Mr Buruspat added that the while smoking will be prohibited on the beaches affected by the measure, there will be "designated areas" further inland where smokers will be able drop their litter "in provided containers".

The ban, which will come into effect next month, will apply to beaches in the provinces of Phuket, Prachuap Khiri Khan, Chon Buri and Songkhla, and includes the popular resorts of Koh Samui and Pattaya, the Bangkok Post reports.

Thailand is initially implementing the ban on 20 beaches but said that if successful the measure could be uniformly adopted.

Mr Buruspat said that officials were also considering measures aimed at tackling the related issue of cigarette butts being dropped by tourists from boats.