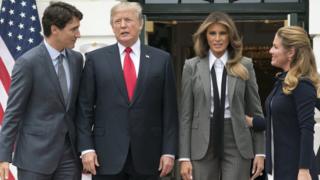 US President Donald Trump has raised the prospect of challenging media licences for NBC News and other news networks after unfavourable reports.

He took aim at NBC, which made him a star on The Apprentice, after it reported he wanted to boost America's nuclear arsenal almost tenfold.

NBC also angered the White House last week when it said the secretary of state had called Mr Trump "a moron".

Mr Trump tweeted on Wednesday morning: "With all of the Fake News coming out of NBC and the Networks, at what point is it appropriate to challenge their License? Bad for country!"

Welcoming Canadian Prime Minister Justin Trudeau to Washington later in the day, the US president denied the NBC story.

"It is frankly disgusting the way the press is able to write whatever they want to write, and people should look into it," he said at the White House.

When asked if he wanted to increase the country's arsenal, Mr Trump said he only ever discussed keeping it in "perfect condition".

"No, I want to have absolutely perfectly maintained – which we are in the process of doing – nuclear force.

"But when they said I want 10 times what we have right now, it's totally unnecessary, believe me."

He added: "I want modernisation and I want total rehabilitation. It's got to be in tip-top shape."

"Recent reports that the President called for an increase in the US nuclear arsenal are absolutely false," he said in a statement.

"This kind of erroneous reporting is irresponsible."

Trump’s assertion that @NBC’s license could be challenged emboldens other gov'ts to embrace authoritarian tendencies https://t.co/h69TvIdbEW

The president's tweet about US broadcast networks provoked a free-speech uproar.

Walter Shaub, who led the US Office of Government Ethics under President Barack Obama, said it could lead to "the point when we cease to be a democracy".

The Committee to Protect Journalists said the US president's comment was a poor example for other world leaders.

According to NBC News, Mr Trump told a top-level meeting at the Pentagon in July that he wanted to dramatically boost the American stockpile of atomic missiles.

He reportedly made the request after seeing a downward-sloping curve on a briefing slide charting the gradual decrease in US nuclear weapons since the 1960s.

Attributing its report to three officials in the room, NBC said Mr Trump's request surprised those present, including the Joint Chiefs of Staff and Secretary of State Rex Tillerson.

The network reported that Mr Trump had also called for additional US troops and military equipment.

The US has 7,100 nuclear weapons and Russia has 7,300, according to the US non-partisan Arms Control Association.

Media commentators say the president would struggle to remove broadcasters' licences if he wished to do so.

The Federal Communications Commission, which regulates US broadcasters, issues licences not to networks as a whole, but to local stations.

It would be difficult to challenge a licence on the basis that coverage is unfair, say pundits.

Last week, White House Press Secretary Sarah Huckabee Sanders assured reporters that Donald Trump was an "incredible advocate" of constitutional free-press protections. This week, the president is contemplating whether a broadcaster could be forced off the airwaves because he doesn't approve of its news coverage.

Never mind that the federal government licenses local televisions stations, only some of which are owned by national broadcasters like NBC.

Just because a threat is unworkable in the extreme doesn't mean the president won't make it.

Media-bashing is one of Mr Trump's favourite pastimes – a means of venting frustration, apportioning blame and, perhaps, distracting reporters who always enjoy a bit of journalistic navel-gazing.

As with the NFL anthem-kneeling controversy, the cultural battle lines form quickly when it comes to questions of media bias. The president knows this and uses it to his advantage.

Taking pot-shots at journalists is one thing, of course. Contemplating the use of government coercion to stifle a broadcaster because of its news content is another.

Even if such an outcome is unthinkable in the US at the moment, there are places in the world where press freedoms aren't as deeply entrenched. Their leaders are watching the president, too.