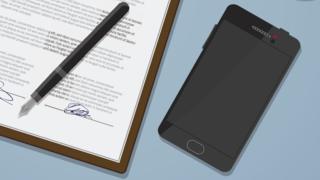 Unsent text accepted as dead man's will by Australian court

A court in Australia has accepted an unsent, draft text message on a dead man's mobile phone as an official will.

The 55-year-old man had composed a text message addressed to his brother, in which he gave "all that I have" to his brother and nephew.

The message was found in the drafts folder on the man's phone after he took his own life last year .

Brisbane Supreme Court ruled that the wording of the text indicated that the man intended it to act as his will.

In the message, the man gave details of how to access his bank account and where he had hidden money in his house.

"Put my ashes in the back garden," he wrote. "A bit of cash behind TV and a bit in the bank."

According to ABC News, the man's wife applied to manage his assets and argued that the text message was not valid as a will because it was never sent.

Typically, for a will to be valid in Queensland, it must be written and signed by two witnesses.

Justice Susan Brown said the wording of the text message, which ended with the words "my will", showed that the man intended it to act as his will.

"The reference to his house and superannuation and his specification that the applicant was to take her own things indicates he was aware of the nature and extent of his estate, which was relatively small," she said.

She said the "informal nature" of the message did not stop it representing the man's intentions, especially as it was "created on or about the time that the deceased was contemplating death, such that he even indicated where he wanted his ashes to be placed".

In 2006, the law in Queensland was changed to allow less formal types of documents to be considered as a will.

Another unusual will accepted in Queensland includes a DVD marked with "my will", in 2013.

The UK's Law Commission is currently fielding a public consultation on the legal rules applying to wills.

The proposals listed by the body includes giving courts the capacity to "dispense with the formalities for a will where it's clear what the deceased wanted".