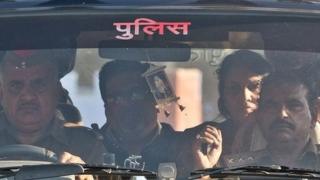 An Indian couple accused of murdering their daughter Aarushi Talwar and their Nepalese servant, Hemraj Banjade, have been acquitted on appeal.

Dentists Rajesh and Nupur Talwar were convicted in 2013 and jailed for life for murder, destroying evidence and misleading investigators.

Their 14-year-old daughter was found dead at their home in May 2008.

Suspicion initially fell on Hemraj until his bludgeoned body was found on the Talwars' roof just one day later.

The murders generated huge interest in India, with every twist and turn in the case receiving wall-to-wall coverage.

On Thursday, the high court in Allahabad said that the couple, who are at present serving their sentence in Dasna jail in Uttar Pradesh state, have to be released immediately, Dilip Kumar, a lawyer for the couple, told the BBC.

Reports quoted the judges as saying that the evidence against the couple was circumstantial and the federal Central Bureau of Investigation (CBI) which investigated the murders had failed to prove beyond reasonable doubt that the Talwars had killed their daughter.

It is not clear whether the CBI will appeal against the judgement.

"If the CBI decide to challenge it, that will be a battle which we will fight but I hope they don't. We need to acknowledge the misery that our system and our society have cost the parents," Aditya Wadhwa, another lawyer for the Talwars, told reporters.

The trial court had based its verdict on circumstantial evidence as key forensic evidence had been lost during two flawed investigations.

Aarushi was found with her throat slit and a fatal head injury in her own bedroom, next-door to her parents' room at their home in the affluent Delhi suburb of Noida.

Her parents told the police they were sleeping in the next room when the murder was committed.

Prosecutors alleged that the Talwars killed their daughter in a rage when they found her in bed with Hemraj.

They also argued that Aarushi's throat was slit in a manner indicating someone with medical skills, and that the two victims were hit by a golf club that was initially hidden by the Talwars.

The prosecutors said the crime scene had also been dressed to mislead investigators.

In the early days of the police investigation, Aarushi was described as a girl of "loose moral character" who chatted with boys and went for "sleepovers" at friends' homes.