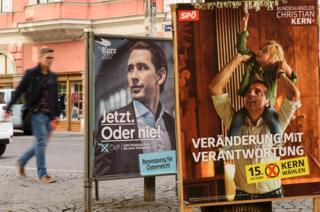 Austrian party leaders will clash in a final TV debate on Thursday night, with conservative hardliners on immigration tipped to win an election on Sunday.

The spotlight will be on Foreign Minister Sebastian Kurz, just 31 years old, whose People's Party (OeVP) has a strong lead in opinion polls.

The nationalist Freedom Party (FPOe) and centre-left Social Democrats (SPOe) are neck-and-neck behind it, polls say.

Mr Kurz argued for a ban on full Muslim veils and cuts in migrants' benefits.

The ban on full-face veils – burkas and niqabs – took effect on 1 October.

For decades Austrian politics was dominated by centrists of the OeVP and SPOe, but observers say a new coalition between them is less likely now than an OeVP-Freedom Party government.

During the campaign ahead of Sunday's snap election, Mr Kurz often reminded voters that he opposed the 2015 influx of irregular migrants.

Austria, on the main transit route, struggled to cope until an EU deal with Turkey drastically cut the numbers flowing through the Balkans.

His tough stance on immigration appears to have drawn many FPOe supporters to his conservative OeVP.

The FPOe was launched in 1956 by ex-Nazis and enjoyed electoral success under the late Jörg Haider, who gave the party a populist, anti-EU makeover.

In 2000 Mr Haider's party joined the OeVP in government, souring relations with the EU. He died in a car crash in 2008 and the party's current leader is Heinz-Christian Strache.