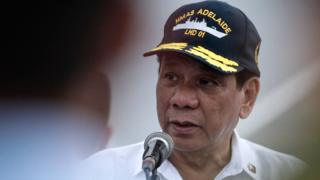 Philippine President Rodrigo Duterte has demoted the country's police from leading his drugs war, amid growing criticism of the bloody crackdown.

The country's Drugs Enforcement Agency will take charge of operations instead.

In January, he also suspended police from the war on drugs, calling them "corrupt" – but reinstated them again shortly afterwards.

That suspension came after a South Korean businessman was kidnapped and killed by anti-drug police.

The woman who kills drug dealers for a living

His policy of endorsing extrajudicial killings in the war against drugs has drawn widespread international condemnation and also led to criticism within the country.

In September, thousands attended rallies criticising his war on drugs – although thousands of others attended rival pro-Duterte rallies.

Analysis by the BBC's Howard Johnson in Manila

What we're seeing at the moment is an attempt by the government to restructure its war on drugs.

A summer of bad headlines, notably the killing of three teenagers by the Philippine National Police (PNP) force, sparked street protests and condemnation from the Catholic Church.

Over the last month the killings of drug suspects have seemingly slowed down while the PNP has launched a community drug rehabilitation programme.

The mood music is also changing. The PNP said last week of the 6,225 drug-related deaths during its operations not one of them was an extra-judicial killing, while the president's long-term partner, Cielito "Honeylet" Avanceñahas, said she believed he would never order the police to kill drug addicts.

It's all a far cry from the early days of President Duterte's term in office when he said: "There's three million drug addicts. I'd be happy to slaughter them."

The most high-profile controversy this summer involved a boy killed in Caloocan on 16 August.

Police said the 17-year old ran from them and then opened fire, so they shot him. Yet his parents denied he had any involvement in drugs.

A witness said police tried to force a gun into his hand and CCTV footage shows a boy, said to be him, being dragged away by police, contradicting claims he ran.

As a consequence, the police said 1,200 officers from the capital Manila would be retrained and then assigned to other units.

While Mr Duterte still enjoys widespread support, a fresh poll this weekend showed trust and satisfaction in the president drop to the lowest levels since the start of his term.

On Thursday, relatives of two people killed by police filed a case in the country's supreme court calling for the drug war to be declared illegal.