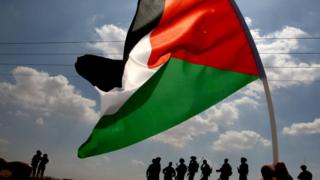 The Palestinian group Hamas says it has reached an agreement with rival group Fatah, ending a decade-long rift.

Hamas, which controls the Gaza Strip, said details of the deal would be released later on Thursday. Fatah has not commented.

Egypt has been brokering reconciliation talks in Cairo.

The pro-Hamas Palestinian Information Centre announced the agreement, saying details would be revealed at a news conference in Cairo at midday.

The move had been a key demand of Palestinian President Mahmoud Abbas whose Fatah-dominated Palestinian Authority governs parts of the West Bank.

Palestinian Prime Minister Rami Hamdallah then made a rare trip to Gaza.

He said the Palestinian Authority would begin taking control of Gaza's administrative affairs and "security responsibilities".

Egypt and Israel, Hamas' chief adversary, have maintained a blockade around Gaza since 2006. Hamas calls for Israel's destruction and has fought three wars with the Jewish state.