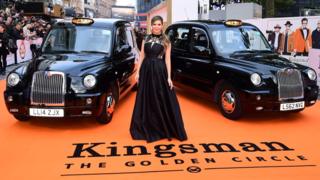 Cambodia has banned Hollywood movie Kingsman: The Golden Circle over its alleged negative portrayal of the kingdom.

The decision was made last week on the grounds that the blockbuster was unacceptable for local audiences.

Authorities say the movie uses "Cambodian land as the place where the terrorists stay and make trouble for the world".

Since it was released less than a month ago the movie, which is a sequel to Kingsman: The Secret Service, has grossed more than $261m (£199m).

The action-comedy film chronicles British and American spy organisations teaming up in search of the secret base of a drug lord.

Once they find the base, which is a temple surrounded by jungles in Cambodia, a showdown between the two sides ensues.

"After we reviewed the film we found some problems," Bok Borak, from the Ministry of Culture and Fine Arts told Cambodian English daily The Phnom Penh Post.

The official cited the film's clear reference to Cambodia as a place where villains are based and "make trouble for the world" as a major point of concern.

While the movie does not name the temple, he said it resembles Ta Prohm, a historical temple that was inscribed as World Heritage by Unesco in 1992.

Cambodia, a kingdom in southeast Asia, has previously banned four other movies including Fifty Shades of Grey and The Wolf of Wall Street, citing similar concerns.

Westec Media, which purchased the local distribution rights of the movie, said the decision was "childish or immature".

"Every movie cannot be depicting Cambodia as heaven .  You need to face the reality that all countries have criminals," he said.