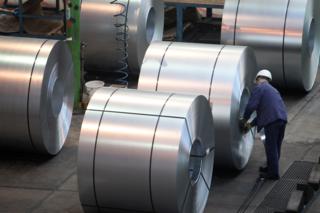 Kobe Steel President Hiroya Kawasaki warned on Thursday there may be more cases of falsified product data, in a sign the unfolding scandal may worsen.

The company has already admitted that products were sold to about 200 firms with false data about their strength and durability.

Toyota, Mazda and General Motors are among the firms affected.

The Japanese government wants the steelmaker to report on the result of its safety checks within two weeks.

The country's trade ministry also wants Kobe Steel to provide reasons for the data fabrication and prevention measures within a month, Mr Kawasaki told reporters after meeting with the ministry.

Kobe Steel revealed on Sunday that some aluminium and copper products shipped from September 2016 to August 2017 were falsely labelled as meeting the specifications requested by customers. It admitted the falsifications may have started a decade ago.

Since then the embattled firm has seen its shares plunge nearly 40% – wiping more than $1.5bn (£1.1bn) off its market value.

Concern has spread across a range of industries – including car, train and aircraft manufacturers – that source materials from Kobe Steel. Companies from Japan and abroad are investigating whether safety of their products has been compromised.

Toyota, General Motors, Honda and Mazda are among the major automakers checking their models. Toyota said it uses materials from Kobe in bonnets, rear doors and other car parts.

Both Honda and Mazda use Kobe aluminium in the bonnets of some of their cars.

"We won't know if we need to take any action until those investigations are complete," a spokesperson for the Mazda said.

A number of companies have been satisfied by safety checks.

Hitachi said its new trains in Britain used Kobe Steel but had all passed rigorous tests. Central Japan Railway said while some Kobe Steel parts for its bullet trains did not meet Japanese industrial standards, there were no safety issues.

And US plane manufacturer Boeing also said it had not found any safety issues.