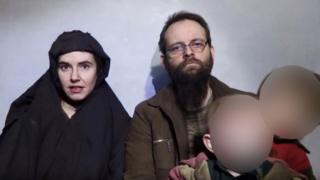 Pakistani soldiers have freed a North American family of five who were being held hostage by the Afghan Taliban, Pakistan's military says.

They were rescued during an operation in Kurram tribal district near the Afghan border, the army said.

The army did not name the family, but Canadian Joshua Boyle and his US wife Caitlan Coleman were kidnapped while backpacking in Afghanistan in 2012.

They are known to have had children while in captivity.

"Pak Army recovered five Western hostages including one Canadian, his US national wife and their three children from terrorist custody," an army statement said.

Videos of the couple have been released by the Taliban-aligned Haqqani network during their captivity. The insurgent group has been demanding the release of three of its prisoners in Afghanistan.

The latest video, released last December, showed the couple with two young boys. In it, Ms Coleman – who was pregnant when she and Mr Boyle were abducted – begged for an end to their "Kafkaesque nightmare".