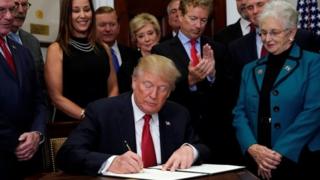 US President Donald Trump has signed an executive order allowing the sale of health insurance plans that are exempt from some Obamacare regulations.

Consumers could also buy short-term policies that would skirt protections in place for pre-existing conditions.

The order comes after Congress has repeatedly failed to repeal the law.

Mr Trump said the White House was "starting the process" of repealing and replacing the Affordable Care Act, known as Obamacare, in announcing the executive order at a news conference on Thursday.

He called the order the "first steps to providing millions of Americans with Obamacare relief".

The directive would allow small businesses and some individuals to band together and form associations to sponsor coverage across state lines.

The order, however, does not lift the Obamacare individual mandate that requires most Americans to have some form of health insurance or face a tax penalty.

It was unclear when the plans would be available but it is unlikely to affect consumers during the 2018 open enrolment period, which begins on 1 November.

Supporters of the order say it will reduce the soaring costs of insurance premiums by allowing competition across the state lines.

But critics argue it could de-stabilise the Obamacare market by encouraging healthy consumers to leave their current plans, prompting a spike in premium costs for older Americans and those with pre-existing conditions.

The Trump administration is likely to face legal challenges from medical associations, consumer groups and some insurers who have railed against earlier repeal efforts.

The president added he would continue to press Congress to repeal and replace his predecessor's signature health bill.