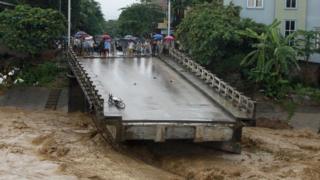 Another 40 are missing, and thousands have been evacuated from their homes, as a tropical depression sweeps across northern and central Vietnam.

Among the missing is a local journalist reporting on the floods, who was swept away after a river bridge collapsed.

The latest bout began on Monday, and weather officials have warned that the tropical depression may intensify into a more powerful storm in coming days.

The death toll was one of the highest ever recorded in the country that was caused by flooding, Reuters reported Vietnam's disaster prevention agency as saying.

Officials say at least 16,000 homes have been submerged.

The northern Yen Bai and Hoa Binh provinces have been particularly hard hit, with reports of widespread inundation and deadly landslides, and homes washed away.

"We had no time to react. My oldest son was swept away by the floodwater," one Yen Bai resident told news outlet Tuoi Tre.

On Wednesday several people, including a Vietnam News Agency reporter, were swept away by a torrential river after a bridge they were crossing in Yen Bai collapsed, local media said.

Meanwhile 18 people were buried in an overnight landslide in Hoa Binh, with most of them still missing by Thursday, according to state media.

Hundreds of soldiers have been deployed for rescue efforts. A disaster agency official told AFP news agency that they were "mobilising all forces to search for the missing".