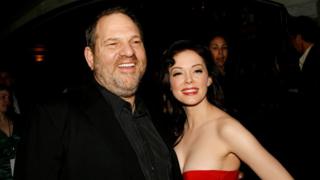 The scandal deluging Hollywood producer Harvey Weinstein has deepened after US actress Rose McGowan publicly accused him of raping her.

In a series of tweets, McGowan also accused Amazon Studio chief Roy Price of having ignored her when she made the allegation earlier.

Amazon has put Price – himself accused on Thursday of sexually harassing a female producer – on leave of absence.

Weinstein denies any sexual assaults. There was no comment from Price.

Police forces in the US and UK police have launched investigations into sexual assault allegations against Weinstein:

Addressing Amazon chief executive Jeff Bezos on Twitter, McGowan – who has appeared in Scream, The Black Dahlia and TV series Charmed – criticised the company for doing business with Weinstein.

"I told the head of your studio that HW raped me," she wrote. "Over & over I said it. He said it hadn't been proven. I said I was the proof."

Price was separately accused by Isa Hackett, a producer on one of Amazon's shows, of having lewdly propositioned her in a taxi and at a corporate dinner in 2015, the Hollywood Reporter writes.

Hackett reported the incident to Amazon executives immediately, she was quoted as saying, and an outside investigator was brought in.

She was not told the outcome of the investigation but did not see Price again at any events involving her shows, she added.

In a statement, Amazon said: "Roy Price is on leave of absence effective immediately. We are reviewing our options for the projects we have with The Weinstein Co."

Three women earlier accused Weinstein of rape in an investigative article in The New Yorker magazine.

They are Italian actress and director Asia Argento, former aspiring actress Lucia Evans and a third woman who was anonymous.

The same article says 10 other women told the author that Weinstein had either sexually harassed or assaulted them between the 1990s and 2015.

The New York Times broke the story on 5 October when it detailed decades of allegations of sexual harassment against Weinstein.

Weinstein has insisted through a spokeswoman that any sexual contacts he had were consensual.

Oscar-winning director Oliver Stone has said he believes that Weinstein should not be judged prematurely.

"If he broke the law it will come out," he told reporters on a visit to South Korea for a film festival. "I believe that a man shouldn't be condemned by a vigilante system."

In a subsequent social media post, however, Stone expressed a wish to "recuse" himself from a TV series about Guantanamo Bay "as long as The Weinstein Company is involved".

The director wrote on Facebook that he was "appalled" by the allegations made against Harvey Weinstein and "commend[ed] the courage of the women who've stepped forward".

In another development, Twitter briefly suspended McGowan for violating its terms and policies after she included a personal phone number in tweets about sexual abuse allegations.

Some prominent US figures, notably from the entertainment world, said they would boycott the platform on Friday in protest, using the hashtag #WomenBoycottTwitter.