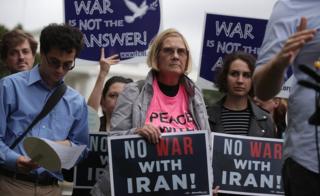 US President Donald Trump is expected to withdraw backing from the nuclear accord with Iran on Friday and lay out a more confrontational strategy.

The move would not withdraw the US from the deal but give Congress 60 days to decide whether to do so by re-imposing sanctions.

Secretary of State Rex Tillerson has been consulting with counterparts in Europe and China, officials said.

Mr Trump has been under pressure at home and abroad not to scrap the deal.

Under the 2015 accord, Iran agreed to freeze its nuclear programme in return for the partial lifting of sanctions.

President Trump has been a longstanding critic of the deal and pledged to scrap it during his campaign.

Congress requires the US president to certify every 90 days that Iran is upholding its part of the agreement. Mr Trump has already recertified it twice.

Speculation that Mr Trump might refuse to recertify the deal has caused alarm among US allies and some members of his own administration.

Defence Secretary James Mattis told a Senate hearing earlier this month it was not in the national interest to abandon it.

President Trump has called the Iran nuclear accord the "worst deal ever negotiated", and threatened to tear it up.

It looks, though, as if he will first try to "fix" it. He is expected to tell Congress that Iran is not meeting certain conditions set by US law; that the deal's benefits are too meagre, for example, to justify continued sanctions relief.

Then it would be up to lawmakers to decide whether to re-impose sanctions.

Mr Trump is unlikely to advocate they do so now. Even critics of the deal fear this would isolate the US and weaken its credibility, because Iran is complying with the agreement.

Republicans have suggested they could use decertification as leverage to get the changes they want.

Ed Royce, Republican chairman of the House Foreign Affairs Committee, said that though the deal was "flawed, I believe we must now enforce the hell out of it".

Foreign leaders, including British PM Theresa May and French President Emmanuel Macron, have urged Mr Trump to keep the deal.

Mr Trump recently reaffirmed his long-held opposition to the accord, calling it "one of the most incompetently drawn deals I've ever seen".

"They got a path to nuclear weapons very quickly, and think of this one – $1.7bn in cash," he told Fox News, referring to a decision by the Obama administration to settle a decades-long legal claim with Iran as part of the deal.

Mr Trump has repeatedly said Iran has broken the "spirit" of the deal, although the International Atomic Energy Agency (IAEA) and Congress agree Iran is complying with the terms of the agreement.

The 2015 Joint Comprehensive Plan of Action was designed to prevent Iran developing a nuclear weapon.

The lifting of sanctions is dependent on Iran restricting its nuclear programme. It must curb its uranium stockpile, build no more heavy-water reactors for 15 years, and allow inspectors into the country.