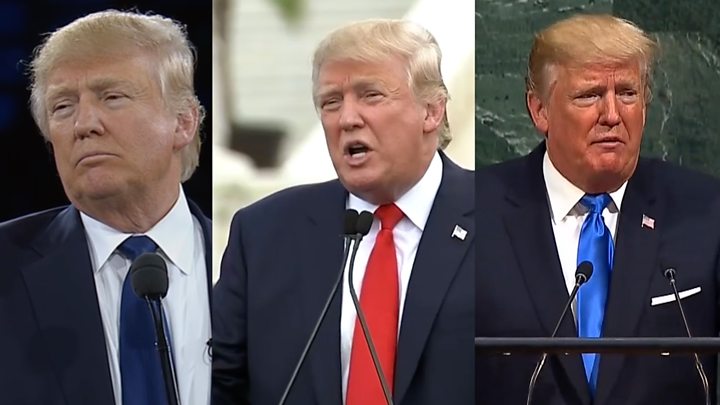 US President Donald Trump is expected to set out a more confrontational strategy towards Iran, accusing it of pursuing "death and destruction".

It is thought he will focus on its non-nuclear activities, particularly those of the Revolutionary Guards (IRGC), accused of supporting terrorism.

The new strategy calls for stricter enforcement of the 2015 nuclear deal.

He is expected to refuse to certify to Congress that Iran is complying with the deal.

Official sources have told the Associated Press Mr Trump will say Iran is living up to the letter of the agreement but also that the deal is fatally flawed.

While he may not ask for sanctions to be re-imposed, he may urge Congress to approve tough new requirements for Tehran to continue to benefit from sanctions relief.

Mr Trump is under pressure at home and abroad not to scrap the seven-country deal under which Iran agreed to freeze its nuclear programme in return for the partial lifting of sanctions.

If he did decertify it, it would not mean pulling out of the deal but it would open up a path under which Congress could eventually halt US compliance with the deal.

During last year's election campaign, Mr Trump pledged to throw out the agreement concluded under his predecessor, Barack Obama.

President Trump has called the Iran nuclear accord the "worst deal ever negotiated", and threatened to tear it up.

It looks, though, as if he will first try to "fix" it. He is expected to tell Congress that Iran is not meeting certain conditions set by US law; that the deal's benefits are too meagre, for example, to justify continued sanctions relief.

Then it would be up to lawmakers to decide whether to re-impose sanctions.

Mr Trump is unlikely to advocate they do so now. Even critics of the deal fear this would isolate the US and weaken its credibility, because Iran is complying with the agreement.

Republicans have suggested they could use decertification as leverage to get the changes they want.

Why is Trump speaking now?

Under the Iran Nuclear Agreement Review Act (Inara), Congress requires the US president to certify every 90 days that Iran is upholding its part of the nuclear agreement.

Mr Trump has already recertified it twice and has a deadline of Sunday to make his latest report back.

Refusal to recertify would give Congress 60 days to decide whether to pull out of the nuclear deal by re-imposing sanctions.

What is Trump likely to announce?

At a speech earlier on Thursday, Mr Trump called Iran "a terrorist nation like few others" and said his Iran announcement, which will be made in the White House, would be "very interesting".

A strategy paper released by the White House highlights calls for neutralising Iran's "destabilising influence and constraining its aggression, particularly its support for terrorism and militants".

The US, it says, will work to revitalise traditional alliances and regional partnerships as "bulwarks against Iranian subversion".

Efforts will be made to deny funding for the Iranian government and the IRGC's "malign activities" and counter threats from ballistic missiles "and other asymmetric weapons".

The nuclear deal does not cover the missile development programmes, and last month Iran successfully tested a new-medium range missile with a 2,000km (1,200-mile) range.

The IRGC's "gross violations of human rights" will be highlighted to the rest of the world," the strategy paper says.

"Most importantly, we will deny the Iranian regime all paths to a nuclear weapon."

What will Trump do about the deal?

What do other key players say?

"We also have to tell the Americans that their behaviour on the Iran issue will drive us Europeans into a common position with Russia and China against the USA," German Foreign Minister Sigmar Gabriel warned in a newspaper interview.

Kremlin spokesman Dmitry Peskov said that US withdrawal from the nuclear deal would "damage the atmosphere of predictability, security, stability and non-proliferation in the entire world".

Former Swedish Prime Minister Carl Bildt said a US withdrawal from the deal would show it could not be relied upon and could have ramifications elsewhere, for example on efforts to resolve the North Korean nuclear issue.

The IAEA and Congress currently both agree Iran is complying with the terms of the nuclear agreement.

What is Iran's position?

The speaker of the Iranian parliament, Ali Larijani, said on a visit to Russia that a US withdrawal from the deal would signal its end.

He warned that the collapse of the deal could result in global chaos, Russian media report.

What is the nuclear deal?

Formally known as the Joint Comprehensive Plan of Action, it is designed to prevent Iran developing a nuclear weapon.

The lifting of sanctions is dependent on Iran restricting its nuclear programme. It must curb its uranium stockpile, build no more heavy-water reactors for 15 years and allow inspectors into the country.

Who are the Revolutionary Guards?

Set up shortly after the 1979 Iranian revolution to defend the country's Islamic system, they provide a counterweight to the regular armed forces.

They are a major military, political and economic force in Iran, with some 125,000 active members, and oversee strategic weapons.

They have been accused of supporting Shia Muslim militants in Lebanon, Yemen, Iraq and Syria.