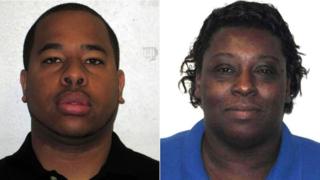 Two prison guards have died after inmates attempted to break out of a North Carolina jail.

Justin Smith, 35, and Veronica Darden, 50, died after prisoners at the Pasquotank Correctional Institution tried to escape on Thursday at 15:00 local time (19:00 GMT).

Three other guards remain in a critical condition in hospital.

According to officials, the inmates set fire to the prison's specialty sewing plant before attempting the escape.

The initial fire was put out, but the prisoners lit a second fire at the plant, where about 30 inmates work.

The fire was finally extinguished by 17:00 local time.

The exact circumstances surrounding the deaths of Ms Darden, the manager responsible for supervising and training at the plant, and Mr Smith, a correctional officer, have not been revealed.

In total, 10 guards were taken to hospital, seven of whom have since been released. Four inmates were also treated for injuries.

All inmates have been accounted for since, North Carolina's Department of Public Safety said.

"Those who work in our prisons do a difficult and demanding job that is critical to our safety," he said.

"We're grateful to these fallen prison employees for their service, and we offer our condolences to their families, friends, co-workers and community on this tragic loss."