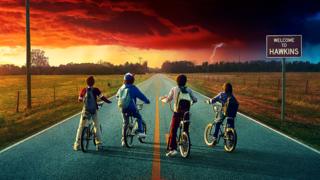 Netflix to raise another $1.6bn to finance new films and shows

Netflix is raising another $1.6bn (£1.2bn) from investors to finance new shows and possibly make acquisitions.

The video streaming service plans to spend up to $8bn on content next year to compete with fast-growing rivals.

Netflix will issue bonds to investors, although the interest rate it will pay has yet to be decided, the company said in a statement.

Netflix plans to release 80 films next year, but some analysts are wary about its cash burn and debt interest costs.

The company's latest debt fundraising is its largest so far, and the fourth time in three years it has raised more than $1bn by issuing bonds.

Earlier this month, Netflix said it would raise prices in countries including the UK and US for the first time in two years.

The price rises come as Netflix faces growing competition from Amazon and other sites such as Hulu and Disney in the US.

Netflix has spent heavily on original programming such as The Crown, Stranger Things and House of Cards.

One movie, Mudbound, was described by Variety as "an epic about race and poverty in the 1940s Mississippi Delta", and stars Mary J. Blige and Carey Mulligan.

Some critics say it is a contender for the Academy Awards and would be the first Netflix feature to be in the Oscars race.

Netflix's share price has risen more than 50% this year on the back of subscriber growth that has beat expectations. The company now has more than 109 million subscribers globally, adding 15.5 million so far this year.

The move to take on more corporate debt comes amid expectations that borrowing costs may increase in coming months. The US Federal Reserve is weighing another rate hike by the end of 2017.