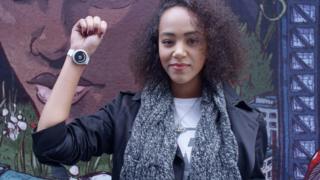 The chief of the CES tech expo has revealed that the UK government is helping fund a selection of start-ups to attend its next event in January.

The funding of a "pavilion" within the show's Eureka Park start-up zone represents a strategy shift for the UK.

Gary Shapiro had previously said it was "a source of embarrassment" that small UK companies had not received such support at the 2017 show.

Ministers had insisted that UK firms still had a "significant" presence.

TechUK – an industry group that has partnered with the government to run the stands – acknowledged that Mr Shapiro's intervention had made a difference.

"We've been pushing the DIT [Department for International Trade] for some time to give us additional support.

"It gives us a stronger identity by having a hub of a number of UK companies and allows us to promote a central location."

The event attracts both the media and retail buyers from across the globe, allowing manufacturers to attract publicity and strike business deals at the week-long event.

The Great Britain and Northern Ireland Pavilion will provide pods to about a dozen start-ups. The spaces will be smaller than a separate stand, but help is being provided to design the area and attract visitors.

Mr Shapiro revealed the initiative at a CES preview event in London.

He later told the BBC that the British government and TechUK had "stepped up, [by] having a presence that they did not have last year".

One beneficiary is Doppel, a five-person London-based firm that has created a wrist-based device designed to make wearers feel more alert or relaxed, depending on its setting.

The company, which will pay its own travel and accommodation costs, said it expected its total bill to come to about £2,100.

"Without this support we definitely wouldn't have been able to exhibit," said Doppel's head of marketing, Georgina Orso.

"Saving thousands of pounds makes the difference between attending and not attending for a pre-revenue company like us."

TechUK said that if the initiative was a success, it hoped to host an even bigger space in 2019.

The DIT added in a statement: "We help exporters make the most of global opportunities… [including] trade missions for high value sectors like the tech sector and trade shows like CES, where we will be supporting a number of UK exhibitors next year."