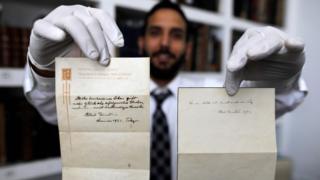 Two notes written by Albert Einstein describing his theory for happy living have sold at an auction house in Jerusalem for $1.56m (£1.19m).

Einstein gave the notes to a courier in Tokyo in 1922 instead of a tip.

He had just heard that he had won the coveted prize and told the messenger that, if he was lucky, the notes would become valuable.

Einstein suggested in the notes that achieving a long-dreamt goal did not necessarily guarantee happiness.

The German-born physicist had won the Nobel Prize for physics and was in Japan on a lecture tour.