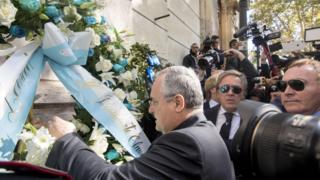 The material was found in an area of Rome's Olympic Stadium occupied by hard-core Lazio fans known as "ultras".

Anne Frank became famous for her diary of life as a German Jew in Nazi-occupied Amsterdam in World War Two.

Local rivals Lazio and Roma share the stadium, and the "ultras" – known for their racist chants and often violent behaviour – left the stickers and anti-Semitic slogans such as "Roma fans are Jews" during a match on Sunday.

The head of Rome's Jewish community, Ruth Dureghello, posted a picture of the stickers on Twitter, and added: "This is not soccer, this is not sport. Anti-Semites out of the stadiums."

The post was then retweeted by Rome's Mayor Virginia Raggi, and the Italian football association is expected to investigate the case.

Sports Minister Luca Lotti said that those responsible would be "identified and punished", adding: "There is no justification. These are instances to be condemned unconditionally."

"I am here to express our total dissociation towards all xenophobia, racism, anti-Semitism," he was quoted by Italian newspaper La Repubblica (in Italian) as saying.

He added that the club would take 200 fans every year to visit the museum on the site of Nazi death camp at Auschwitz, where more than one million people were murdered.