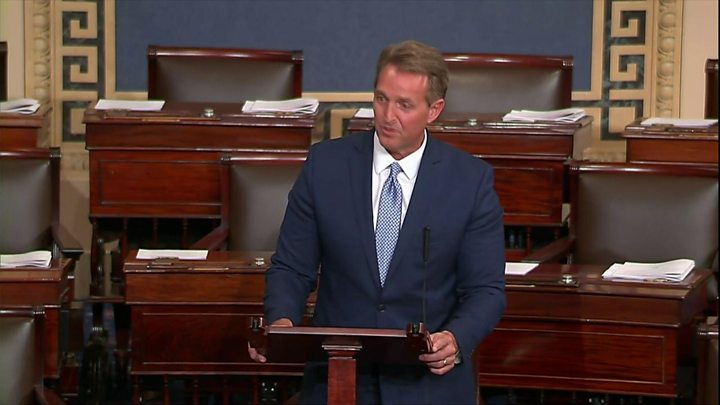 A US Republican senator says he will not seek re-election, delivering a fierce attack on President Donald Trump.

Arizona Senator Jeff Flake said "reckless, outrageous and undignified behaviour" at the top of the US government was dangerous to democracy.

The US president is already embroiled in a row with another Republican Senator, Bob Corker.

Taking to the floor, he said he did not enjoy criticising the president but felt it was "a matter of duty and conscience".

"We must never regard as 'normal' the regular and casual undermining of our democratic norms and ideals," he said.

He lamented the "flagrant disregard for truth or decency, the reckless provocations, most often for the pettiest and most personal reasons".

"I have children and grandchildren to answer to, and so, Mr President, I will not be complicit," he added.

White House press secretary Sarah Sanders said it was "probably a good move" Mr Flake was standing down, suggesting he would not win re-election.

Jeff Flake was facing an uphill battle in his re-election campaign next year. It wasn't because the incumbent senator was matched up against a particularly tough Democrat, but rather because the Republican Party had shifted under his feet.

He found himself at odds with Donald Trump and the populist, nationalist movement that swept the president to power – and facing a right-wing challenger backed by Mr Trump's former adviser and campaign guru, Steve Bannon.

So with poll numbers indicating he very well might be unceremoniously dumped from office, Mr Flake decided to go out on his own terms.

It's become almost a cliché at this point that a Republican Trump critic only finds his voice once his political career is at or near an end.

Mr Flake's situation is different. His career is at an end not by his choice, but by forces outside his control. He's been an outspoken Trump critic, and soon he will be out of a job.

Thank you to my dear friend @JeffFlake for your honorable service to the state of #Arizona & the nation.

US Republican majority leader Mitch McConnell said he had "witnessed a speech from a very fine man".

In a series of television interviews earlier in the day, Mr Corker accused the president of lying, adding that he had debased the US and weakened its global standing.

Mr Trump fired back on Twitter, calling the Tennessee senator a "lightweight" who "couldn't get re-elected".