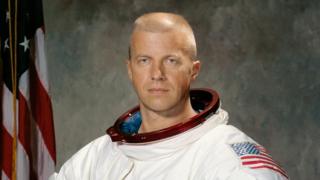 US astronaut Paul Weitz, who helped save a Nasa space station after it was damaged during launch, has died aged 85.

Mr Weitz, who died at a retirement home in Flagstaff, Arizona, also served as the first commander of the space shuttle Challenger.

He was a naval aviator before joining Nasa in 1966.

He was the pilot on the first mission to Skylab, the US space station which orbited Earth from 1973 to 1979.

The orbiting laboratory had been launched without crew on 14 May 1973. But a shield to protect the station from collisions with small meteorites had torn loose during lift-off.

The shield also protected Skylab against extremes of temperature, and without it, the station began to overheat.

Mr Weitz and his fellow crew members Pete Conrad and Joseph Kerwin were supposed to launch on 15 May. But Nasa delayed the flight so that the crew could practice repairs on the ground.

The astronauts eventually launched on 25 May and approached Skylab in their Apollo command module. Positioning their spacecraft near a jammed solar panel on Skylab, Weitz opened the Apollo module's airlock and extended a 3m (10ft)-long pole designed to free the component.

He tugged hard at the solar panel, while Joe Kerwin held him by the ankles.

"We thought maybe we'd just break it loose. So we got down near the end of the solar array and I got a hold of it with the shepherd's crook," Mr Weitz said in an interview with Nasa in 2000.

"But what we really hadn't thought about was, in heaving on it, trying to break the thing free, what I was doing, in effect, I was pulling the command module… in toward the workshop."

"Also, surprising in a totally weightless environment, I was moving the workshop some, too, because we could see its thrusters firing to maintain its attitude… So it made for some dicey times."

It was clear that the array wasn't going to budge, so the astronauts went back inside the command module.

After several failed attempts to dock with the command module, the astronauts finally entered Skylab and successfully deployed a replacement sunshade to lower temperatures inside the lab.

Weitz's second flight was in April 1983 as the first commander of the space shuttle Challenger. He was then at the relatively advanced age (in those days) of 51.

Just three years later, the shuttle was destroyed in an accident on lift-off which killed all seven astronauts on board.

If the Apollo programme had not been cancelled in the early seventies, Mr Weitz might have flown to the Moon – possibly on Apollo 20.