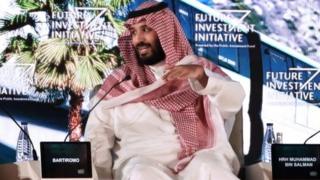 Saudi Arabia has unveiled plans to build a new city and business zone – a project that will be backed up by more than $500bn (£381bn) in investment.

It will focus on nine sectors including food technology and, energy and water.

The crown prince has been leading a drive to move Saudi Arabia away from its dependence on oil revenues.

In August, the Gulf kingdom launched a massive tourism development project to turn 50 islands and other sites on the Red Sea into luxury resorts.

However, the extremely ambitious nature of Mohammed bin Salman's vision is sure to raise questions about how realistic it is, the BBC's economics correspondent Andrew Walker says.

Saudi officials said NEOM would be financed "over the coming years" by the state as well as local and international investors.

"NEOM's contribution to the kingdom's GDP is projected to reach at least $100bn by 2030, in addition to its per capita GDP – projected to become the highest in the world," a statement said.

"It is set to become a new vibrant destination" on the coast of the Red Sea and the Gulf of Aqaba, linking Asia, Africa and Europe.

The announcement came at an international business conference in Saudi Arabia's capital Riyadh.

Egypt and Jordan are yet to comment on the new project.

Saudi Arabia, and the crown prince in particular, have a plan called Vision 2030.

At its heart is the modernisation and diversification of the Saudi economy. The country needs it.

Oil accounts for three quarters of Saudi exports and almost as large a share of government revenue.

The price of crude oil is now about half what it was three years ago, and for the long term there is the cloud of climate change. International efforts to deal with it are likely to mean a smaller market for oil producers.

That will not come in the next year or two but getting ready for what is likely to be a very different global energy market is something that needs a great deal of time and money.

Saudi Arabia has in recent months launched a series of reforms aimed at modernising the conservative kingdom.

Last month, King Salman issued a decree allowing women to drive for the first time – a move welcomed by activists.