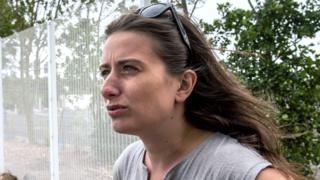 Female assistants working in the French parliament kept a verbal blacklist of MPs whom they regarded as sexual predators, an ex-assistant has said.

The women warned each other about certain MPs over lunch or during coffee breaks, Marine Tondelier said.

Ms Tondelier said certain MPs' names "circulated among us – we knew we shouldn't get in the lift with them".

She now serves as a Greens councillor in Hénin-Beaumont, near Calais in northern France.

"There was a risk of them fondling your bottom, a risk of trouble," she said on France 2 television.

In comments to the news magazine L'Express she said "there was a blacklist of guys with whom you couldn't take risks".

She said it was not a written list, but "informal advice exchanged in the canteen, in coffee breaks, in the evening".

And the election produced a record number of women MPs – 233 out of a National Assembly total of 577. The previous assembly had 155 female MPs.

Accounts of sexual harassment at work have proliferated in France, the US and other countries since the Hollywood sexual abuse scandal broke, centred on the behaviour of movie mogul Harvey Weinstein. He has denied wrongdoing.

Last year the French Green Party was rocked by allegations of sexual harassment and Denis Baupin, deputy speaker of the French assembly, resigned.

Four women colleagues had accused him of sexual harassment. He denied the allegations.

Former French Environment Minister Ségolène Royal said she also had to deal with a case of sexual harassment in her ministry "which had been concealed from me".

"Once I found out I didn't waste any time," French LCI news quoted her as saying. "I learnt that a report had been written, then covered up and the author had been sidelined."

She said "that's what happens when those in charge hush things up".

Ms Tondelier said certain MPs were "drunk with power" and politics fuelled "a tendency to dominate".

"When they're a long way from home for three days, going up to Paris sort of makes them light-headed, it puts them in a holiday mood."