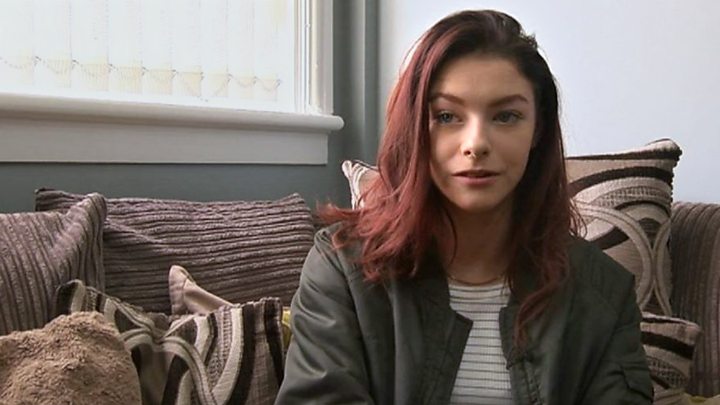 A teenager claims internet trolls "ruined her life" by superimposing her face on pornographic messages that were shared on social media.

Victoria, from Leeds, was told to "go kill yourself" on the Live.me streaming app and her home address was shared on Twitter as a "house to burgle".

Figures obtained by BBC Yorkshire show reports of malicious communication have almost doubled to more than 200 a day.

Police forces in England and Wales were asked to provide the data, with 38 out of 43 responding.

'Tip of the iceberg'

She said she was sent pornographic images that featured her face and had photographs of her house shared online, while another message to her simply said "die".

"I'm on anxiety tablets now. It's knocked my confidence. I don't even go out of the house that much," she said.

"There's still that thought in the back of my mind, where you never know if they are going to be there while you are out.

"At the end of the day, this has legit just ruined my life. I used to be an outgoing person. I'm just trying to get back to my old self."

Victoria went to the police about the malicious communication – defined as sending a letter or electronic communication with intent to cause distress or anxiety – but no arrests were made.

She said: "Sometimes I feel like it's my fault. But it's easier for people to get targeted because they're putting themselves out there on the internet, which I thought was just fun, to make new friends.

"I never thought it would turn out like this."

Supt Mat Davison said West Yorkshire Police was investigating Victoria's case and new lines of inquiry would be acted on.

"Officers have been in regular contact with the victim and members of her family and provided them with updates on the progress of the investigation," he added.

The Times recently reported nine people are arrested each day for posting offensive material online, sparking criticism from human rights groups about "over-policing" of the internet.

However, Essex Police Chief Constable Stephen Kavanagh said the rise in malicious communication was "the tip of the iceberg".

The chairman of the Digital Policing Board, which deals with digital crime nationally, said social network providers should do more to protect online users.

"I think as policing and society changes in to the digital age this is only going to increase," Mr Kavanagh said.

"Providers, government, law enforcers and users all need to get ready how we protect people more effectively, and how we bring criminals to justice."

Dr Michelle Newberry, senior lecturer in forensic psychology at Sheffield Hallam University, said there was a correlation between how much we use social media and the increase in trolling.

She said: "It is very unusual for people not to have their phone with them. We just have that instant access these days."

A spokesperson for Live.me said: "Our goal at Live.me is to create a safe and friendly environment for all of our users which is why it's always heartbreaking to hear stories of users being harassed or bullied.

"We have strict protocols for our moderators to address any community violations, and our automatic software detection and human moderators are on call 24-hours a day, seven days a week, working to combat cyber-bullying, indecent behaviour, or threats of self-harm."