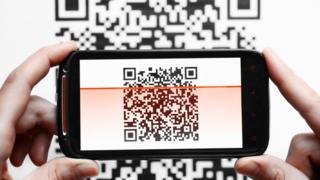 Two French hackers used their computer skills to reconstruct a blurred-out code on TV and claim bitcoins worth $1,000 (£760).

Michel Sassano and Clement Storck had seen an interview with entrepreneur Roger Ver on French television.

Mr Ver had offered $1,000 to viewers – but a QR code needed to claim the money had been blurred out.

The duo analysed a small part of the code that was visible, however, and managed to access the funds.

When the France 2 channel broadcast its interview with Mr Ver earlier this month, he promised the money – just over three Bitcoin Cash coins, worth $1,000 – to whichever viewer was quickest to scan an on-screen QR code.

However, the code had been blurred out by France 2 – Mr Sassano believes this is because of French broadcasting regulations that prevent news programmes from giving away prizes.

"The process to decode the private key from the moment we watched the show to when we entered it in the wallet took, I think, between 12 and 16 hours," Mr Sassano told the BBC.

He and Mr Storck have explained the process in detail in a blog.

Their fortune depended on a moment towards the end of the TV segment when a small portion of the QR code was actually shown unblurred.

The keen-eyed pair also noticed that the top of the QR code and part of the key written in letters and numbers were also not blurred sufficiently, making them readable with software.

They were able to plot what they knew for sure about the code's structure – amounting to roughly a third of it – in a spreadsheet.

From there, the duo worked out as much as they could about the missing portions, based on their knowledge of how QR codes are designed.

Finally, they calculated that there were about 2.1 million possible final combinations.

"We got down to two valid keys that would match bitcoin private keys," says Mr Sassano.

One of these proved to be the answer they were looking for.

They transferred the money on 17 October – an online bitcoin wallet shows the transaction.

"The money is the cherry on the cake but the most exciting was when we found the private key and the algorithm told us this was the one," says Mr Sassano, adding that he has not yet withdrawn the money.

"With almost no information at all they were able to reconstruct the private key and claim the funds," he says.

"If you have time to read the blog it's absolutely incredible."

He also reveals that he has been "inundated" with messages from viewers who watched the programme and wanted to know if he kept a copy of the QR code – but he had not.

"I deleted it," he explains. "Now I have something to tell the French people [who contacted me] – somebody did manage to claim it."