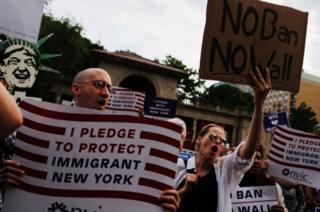 US President Donald Trump is to allow refugees to begin entering to the US again, with stricter rules for applicants from 11 "high risk" nations.

The decision came as a 120-day ban on refugees expired on Tuesday – a part of Mr Trump's executive orders that came to be known as the "travel ban".

Applicants from the 11 nations will be restricted for a 90-day review period.

Last month the president announced the lowest cap on refugee resettlements ever set by a US president.

The State Department said on Tuesday that vetting for the US Refugee Admissions Program (USRAP) was "generally adequate" but "additional in-depth review is needed with respect to refugees of 11 nationalities".

The 11 countries have not been named.

It further announced that additional vetting would be put in place for refugees of all nationalities seeking to join family members already in the US via the "following-to-join" programme.

Elements of the additional vetting were reported by US media. The Department of Homeland Security will collect more biographical data such as the names of family members and places of employment, the reports said.

Officials also plan to do more to mine social media posts, but it is not clear what measures the White House will put in place.

According to Reuters news agency, applicants will now be required to provide proof of their whereabouts going back a decade – twice as long as before.

The temporary ban on all refugees worldwide, as well as a permanent ban on Syrian nationals, was announced by Mr Trump in January during his first week at the White House.

It also included a 90-day ban on citizens from seven Muslims-majority nations.

After it was challenged in court, the White House replaced the order with one that excised the Syria ban, and a judge ruled in June that the travel restrictions could go into effect.

The White House announced on 29 September that it had set a cap on refugees at 45,000 – the lowest since the refugee admissions programme began in 1975.

In President Barack Obama's last year in office, the US accepted 85,000 refugees.

Pro-immigrant group Human Rights First noted in a statement how US "refugee vetting procedures – which include extensive and comprehensive interviews as well as multiple rounds of security vetting with an array of US and international intelligence and law enforcement agencies – are widely recognised as the most stringent in the world".

But in issuing the ban in January, Mr Trump called refugees a threat to US security.

"Since 2001, hundreds of persons born abroad have been convicted of terrorism-related crimes in the United States," the executive order said.

"They have included not just persons who came here legally on visas but also individuals who first entered the country as refugees."

IcetruckOctober 24, 2017
Like story:
tweet
Court: Undocumented teen must be allowed an abortion
4 Behaviors of Someone Who is Emotionally Unstable