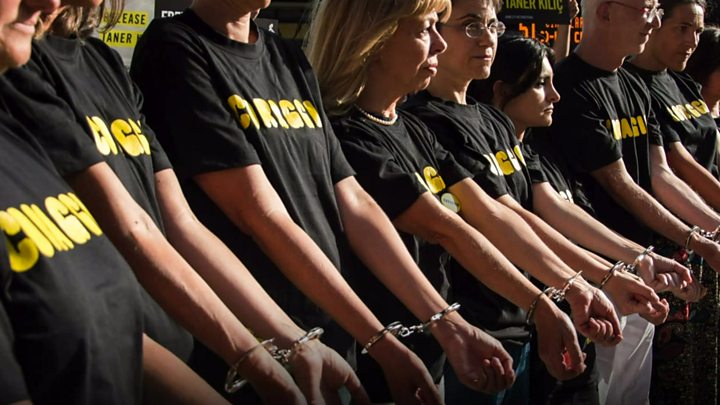 Activists go on trial in Turkey on terror charges

Eight human rights activists on trial in Turkey on alleged terror charges, including a senior Amnesty International official, have been released on bail.

Among those on trial are a German and a Swedish national.

They each face up to 15 years in jail on charges that include membership of and giving aid to an armed terror group. They deny the charges.

Amnesty says the case is a politically motivated attempt to silence critics.

The court order frees eight of the 10 defendants, including the director of Amnesty Turkey Idil Eser. The two other defendants in the case were already free on bail.

The defendants have been permitted conditional release during the duration of their trial pending the verdict. The next hearing is due to take place on 22 November.

Another activist on trial is Amnesty Turkey's chairman, Taner Kilic, who was held in June in the coastal province of Izmir and faces charges in a separate case, which will be held on Thursday. Mr Kilic remains in custody.

In a statement released on Wednesday Salil Shetty, Amnesty's secretary general, said it was time to "take a brief moment to celebrate".

"Today, finally, we celebrate that our friends and colleagues can go back with their loved ones and can sleep in their own beds for the first time in almost four months," he said.

The case has raised further concerns over freedom of expression in Turkey, the BBC's Selin Girit reports.

The country is still ruled under the state of emergency imposed after last year's failed coup attempt.

More than 50,000 people have been arrested and 120,000 sacked or suspended in the aftermath of the failed coup.

On Wednesday, dozens of people gathered outside the court building in Istanbul. They held slogans that read "Free rights defenders".

Ten of the accused activists were detained in a police raid on 5 July during a workshop on digital security on an island off Istanbul.

The event was led by two foreigners – German Peter Steudtner and Swede Ali Gharavi – who have also been under arrest since the raid.

In the indictment, all the activists are also accused of seeking to create "chaos in society".

Amnesty says the "trumped up" charges "do not stand up to the slightest scrutiny".

"From the moment of their detentions, it has been clear that these are politically motivated prosecutions aimed at silencing critical voices within Turkey," Amnesty's Europe director John Dalhuisen said.

Meanwhile, Amnesty's researcher on Turkey, Andrew Gardner, told the BBC that there was now a climate of fear in the country.

If the defendants were not unconditionally released, he added, it would be very difficult for human rights organisations to operate in the country.