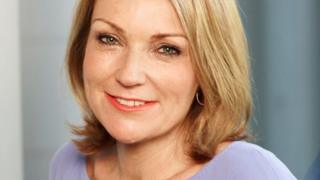 Apple has hired Jay Hunt – the former controller of BBC One and chief creative officer of Channel Four – to join its video team.

Ms Hunt was responsible for TV shows including Sherlock and Luther at the BBC before helping Channel 4 sign up the Great British Bake Off.

Her title at Apple will be creative director, Europe, worldwide video.

Apple has not specified what it involves, but she is expected to commission programmes on its behalf.

Until now, Apple's own programming has served as an adjunct to its Music subscription service and included Planet of the Apps – a business reality TV competition – and Carpool Karaoke – a spin-off from James Corden's Late Late Show.

However, the US firm has committed $1bn (£754m) to acquire and produce further content over the coming months, according to a report in the Wall Street Journal.

Jamie Erlicht and Zack Van Amburg had overseen Breaking Bad, Better Call Saul and Rescue Me among other US shows.

These developments have fuelled speculation that the company is preparing to launch a video subscription service to rival Netflix and Amazon Video, with original content, after failing to convince the US networks to let it sell bundles of their programming.

"It seems like Apple is going for a worldwide push already, even though it hasn't yet made much headway in the US," said Tom Harrington, an analyst at research firm Enders Analysis.

"Jay Hunt is exceptional in the commissioning space. She's exceptional at finding programmes that fit the outlet she's working at.

"She could have worked anywhere she wanted."

Apple is not the only US tech giant investing in the TV industry.

Facebook launched its Watch service in the US in August, offering cookery, fitness and travel-themed programmes among other content.

Twitter is developing news programming in conjunction with Bloomberg and Buzzfeed, and has also acquired streaming rights to several sports events.

Google continues to invest in its YouTube Red service, which produces ad-free films and shows for subscribers.

When Jay Hunt missed out on the job of chief executive at Channel 4, where as chief creative officer she had overseen a series of big hits and bought Great British Bake Off from the BBC, everyone in the industry asked the same question. What jobs in British TV might she actually now want? Answer: not many.

As television is reinvented – from linear, scheduled programmes watched by families around a single television set, to on-demand shows watched largely on mobile phones and tablets, or sometimes through multiple screens – it is the big American technology companies that are driving innovation.

Last week, Netflix showed impressive quarterly growth in subscribers. Many senior figures in the industry say Amazon is changing the rules of the game, by offering massive budgets for drama and documentaries. And there is talk aplenty about social media giants buying up live sports rights.

In hiring Ms Hunt, Apple has reinforced the message that it is taking television and original content very seriously. At her leaving party in Channel 4's London headquarters recently, the universal feeling was that it would be to one of these big technology companies that she moved. That has now come to pass.

Jay Hunt poached Bake Off from the BBC in a move that was met with widespread scepticism, and plenty of derision. Yet with six million viewers per episode, its switch has been a success.

What show might she poach from another broadcaster next – perhaps even her former employers?

Given Apple's market capitalisation of more than $800bn (£603bn), I suspect money won't be an issue. Ms Hunt is going to enjoy her new budget.