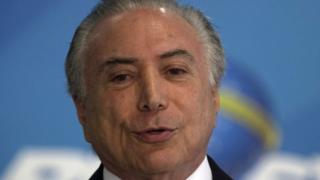 Brazil's President Michel Temer has gone to hospital for tests, as Congress is due to consider whether he should face a corruption trial.

Prosecutors accuse Mr Temer of obstructing justice and racketeering ,which he denies.

He is expected to secure enough support in the lower chamber to survive the vote which is expected shortly.

Mr Temer can only face trial with the approval of two-thirds of the lower house of Congress.

He is currently facing the worst approval ratings in Brazilian history, but lawmakers seem prepared to protect him again, correspondents say.

She was found guilty of tampering with the government accounts in order to hide a growing deficit ahead of her re-election in 2014.