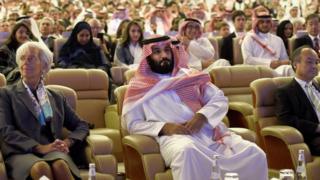 Saudi Arabia's Crown Prince Mohammed bin Salman has said the return of "moderate Islam" is key to his plans to modernise the Gulf kingdom.

He told reporters that 70% of the Saudi population was under 30 and that they wanted a "life in which our religion translates to tolerance".

The prince vowed to "eradicate the remnants of extremism very soon".

He made the comments after announcing the investment of $500bn (£381bn) in a new city and business zone.

Saudi Arabia's royal family and religious establishment adhere to an austere form of Sunni Islam known as Wahhabism, and the king styles himself as the guardian of Islam's two holiest sites.

Islamic codes of behaviour and dress are strictly enforced in the kingdom.

As part of those reforms, the 32-year-old has proposed the partial privatisation of the state oil company, Saudi Aramco, and the creation of the world's largest sovereign wealth fund.

And in September his father, King Salman, announced that a ban on women drivers would end next year, despite long-standing opposition from religious conservatives.

The government also wants to invest in the entertainment sector. Concerts are once again being held and cinemas are expected to return soon.

Prince Mohammed defended the reforms at an economic conference in Riyadh on Tuesday that drew foreign investors and dignitaries.

"We are returning to what we were before – a country of moderate Islam that is open to all religions, traditions and people around the globe," he said.

"We want to live a normal life. A life in which our religion translates to tolerance, to our traditions of kindness," he added.

"Seventy percent of the Saudi population is under 30, and honestly we will not spend the next 30 years of our lives dealing with destructive ideas. We will destroy them today and at once."

The prince stressed that Saudi Arabia "was not like this before 1979", when there was an Islamic revolution in Iran and militants occupied Mecca's Grand Mosque.

Afterwards, public entertainment in Saudi Arabia was banned and clerics were given more control over public life.