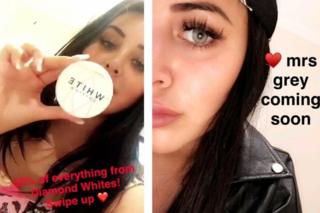 The Geordie Shore and Celebrity Big Brother cast member uploaded images of products from two firms that she has business relationships with, without identifying them as adverts.

This was judged to be a breach of the rules against "hidden" advertising on social media.

It is the first case of its kind to have involved Snapchat.

The Advertising Standards Authority (ASA) normally deals with such matters by ordering offending posts to be deleted or amended.

But since Snapchat Story posts automatically self-delete 24 hours after being added, Ms Simpson has not been ordered to take any action.

The two companies involved, however, have agreed to ensure the hashtag #ad appears alongside adverts they produce in the future.

The 25-year-old has been a "brand ambassador" for tooth polish-maker Diamond Whites for nearly two years, while her management agency, Unleashed PR, began selling a range of coloured cosmetic contact lenses marketed as being "iSpyEyes by Marnie Simpson" earlier this year.

The first showed her posing with a Diamond Whites case with the text "50% of [sic] everything" superimposed, and a link to the company's site.

The second featured the celebrity wearing a grey lens on one of her eyes, with the words "mrs grey coming soon" placed alongside her.

In both cases an unidentified individual contacted the ASA to complain the images had not been identified as ads.

Diamond Whites tried to defend the promotion featuring its product on the grounds that Ms Simpson's followers would already be aware of her commercial relationship with the firm. But the watchdog did not accept that this would be known by everyone who saw the image.

Unleashed PR suggested that in its case the wording featured was so vague that consumers would not know what product was being advertised or where to buy it. But the ASA said its code still required marketing promotions to be flagged as such.

"These might be our first Snapchat rulings, but the principle behind them is as old as the hills – ads, wherever they appear, must be obviously identifiable as ads," the authority's chief executive Guy Parker told the BBC.

"It's just not fair to expect people to play the detective, to work out the status of a tweet, post or story."

Other recent cases where the advertising watchdog has intervened:

The ASA does not have the power to impose fines itself, but can refer repeat offenders – whether they are brands or the celebrities endorsing them – to Trading Standards to take further action.

However, it hopes that the negative publicity that arises from its interventions acts as deterrent enough.

Even so, the ASA acknowledged earlier this month that an increasing amount of its time was being taken up policing "influencer marketing". And it urged marketers to put monitoring systems in place so that they themselves could spot and fix instances where celebrities had failed to use the #ad label.

How lucrative is it to be a social media influencer?

Marketers tend to be secretive about how much they pay specific influencers to promote their clients.

But PMYB – a Nottingham-based agency that works with more than 10,000 influencers – told the BBC that campaigns could range from £5,000 to hundreds of thousands of pounds.

It said that personalities that could deliver a YouTube audience had traditionally been able to charge the most – in part because people are likely to spend longer watching a video than reading a tweet – but Instagram fashionistas were also among the top earners.

Managing director Rohan Midha added that the agency had been involved in a "surprisingly low number" of campaigns on Snapchat to date, and that when it was used it was typically in addition to other social networks.

Although TV stars might seem an obvious pick, they can often be very expensive to employ because their agents inflate their prices.

In other words, a financial tech specialist with tens of thousands of followers might be more valuable to a bank than a generalist with hundreds of thousands.

Even so, reach still plays a role in calculating an influencer's worth. Last year, Captiv8 estimated that personalities with more than seven million followers could charge on average: